“The (PDF) file details the PL1 (Power Level 1), PL2 (Power Level 2) and Tau values for the new Comet Lake 14nm chips. This info was not available in the previous revision”. This is important because the actual power consumption of Intel processors is not directly related to the advertised TDP value.

Intel was called out for not “publicly” advertising the peak power consumption of its processors. The chipmaker only discloses the PL1 value, which is the CPU’s “base clock” speed’s power draw. The PL2 variable, on the other hand, is significantly much higher since it’s the “maximum” power consumption that you can expect when you push the processor to the limit.

Honestly speaking, labeling a processor for example having a 250Watts TDP value is not very good for business,  especially when the majority of consumers/gamers won’t be seeing this level of power consumption draw during normal usage. Nevertheless, it’s a “very” crucial aspect of any processor that should be made public, and not to be overlooked or ignored. INTEL should list the “PL2 value” on the ARK product database. Period.

For example, some of the Intel’s eight-core processors are still rated at a TDP of 95 W, and yet we are seeing power consumption around 150-180W+, which doesn’t make that much sense. To clarify, there are three main variables or parameters to be aware of. These are PL1 (power level 1), PL2 (power level 2), and T (or tau).

When Intel released the Comet Lake lineup, even the reviewers were not provided with the CPU’s actual power state limit values. Now, the recent data confirms that Comet Lake-S CPU’s power level values are much different when compared to the previous generation of processors.

Intel has now confirmed that a 3.5 higher power limit (in PL2 state) is certainly possible for some of the Comet Lake-S processors, which is over the official TDP value.  As an example, the Core i9-10900T, which is having a 35 Watts TDP, has a PL2 value of 123 watts (approx 3.5 times higher). Regular 65 Watts desktop SKUs can have the PL state value adjusted up to 224 Watts, which means roughly 3.45x higher power usage. The higher the PL2 value and longer Tau, the more the CPU will stay in boost mode, which means “higher” clock frequencies.

As I previously mentioned before, ASUS introduced a new feature called “ASUS Performance Enhancement” for the Intel 400-series chipset motherboards, similar to ASRock’s BFB. It works in a similar manner, and the motherboard vendor is actually increasing the processor’s PL1 (power level 1) from the default value to the maximum value, and locking it at that higher value.

“Tau” is a timing variable. It dictates how long a processor should stay in PL2 mode before hitting a PL1 mode, or before having to fall back to the “base” frequency. Do note that Tau is not dependent on power consumption, nor is it dependent on the temp of the processor (because if the CPU hits a “thermal” threshold limit, then a different set of low voltage/frequency value curves are used and PL1/PL2 is discarded.

PL1 is the expected steady state power consumption of any processor (long term). The PL1 is usually defined as the TDP of a processor.

So if the TDP is 60W, then PL1 is 60W.  PL2 on the other hand is the short-term maximum power draw for a processor. This number is higher than PL1, and the processor will go into this state when a stress or workload is applied, allowing the CPU model to use its turbo modes up to the maximum PL2 defined value. 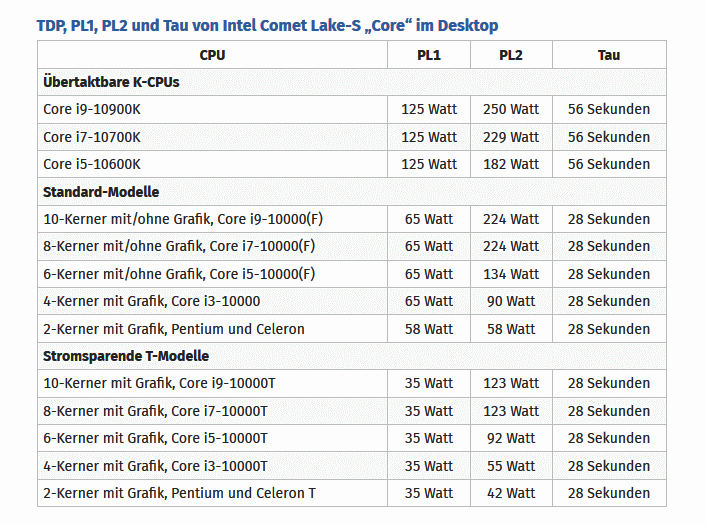