Intel has once again released a set of ‘real-world’ performance benchmarks comparing its 10th Gen desktop CPUs against AMD’s Ryzen 3000XT lineup. The blue team claims that their CPUs offer better gaming performance than AMD, and that they offer a better price/performance ratio. These slides come via the Benchlife tech website.

Intel says their Core i7-10700K CPU is faster at Gaming and also offers a reasonable value than the AMD Ryzen 3900XT CPU. The new real world performance slides were shown during a presentation at the APAC regional conference, and Intel has given some performance metrics of the Intel Core i7-10700K CPU outperforming the AMD Ryzen 9 3900XT in several AAA PC games. These are part of Intel’s internal performance testing methodology, which has been heavily criticized in the past.

In case you didn’t know Intel recently claimed 37% faster Gaming Performance with its 10th Gen Comet Lake-H CPU (when comparing it with AMD’s APU). Their testing methodology remains controversial. Back in June, Intel’s CEO Bob swan stated that the industry should stop relying on benchmarks, and they should instead focus on the ‘Benefits and Impact’ of the Technology. But despite all this, INTEL is still using its own internal benchmarks for comparison.

Nonetheless, Intel used similar test setups featuring an NVIDIA GeForce RTX 2080 Ti GPU and having 16 GB of DDR4 system memory. The memory was running at 2933 MHz speed on the INTEL platform, while the AMD platform was using 3200 MHz DIMM modules. As evident from these company slides, the performance benchmarks clearly show that the Intel Core i7-10700K CPU outperforms the AMD Ryzen 9 3900XT in several AAA PC titles. These are the figures for the Intel core i7 10700K CPU which is:

Apart from these games, several other titles were compared showing the Intel CPU having a 3% lead over the AMD Ryzen 3900XT. 24 out of the 30 titles which were tested performed better on Intel’s processor. Though, in some games the Ryzen 9 3900XT CPU was ahead, like CSGO, which is one the most popular eSports/multiplayer first-person shooter title. All performance and benchmark tests were done on a 1080p screen resolution. 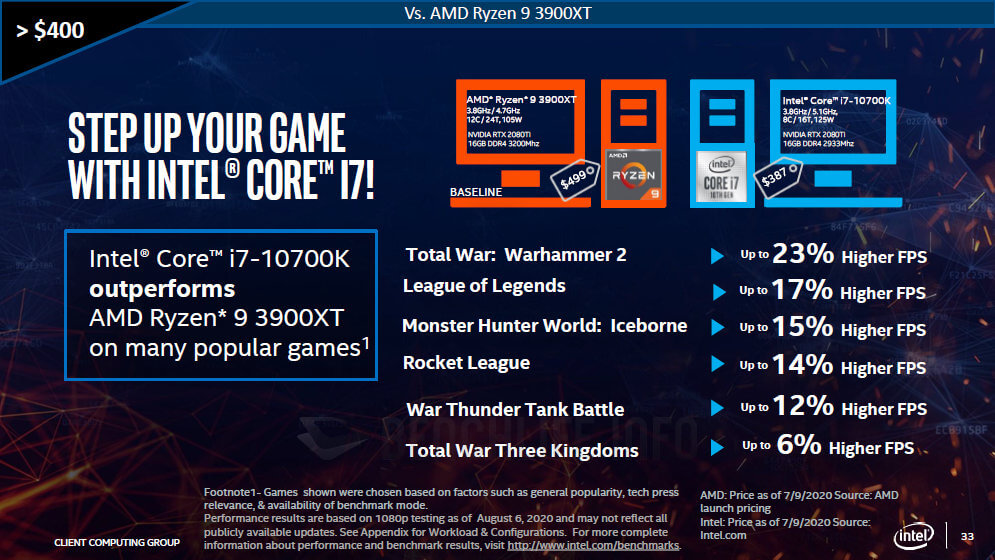 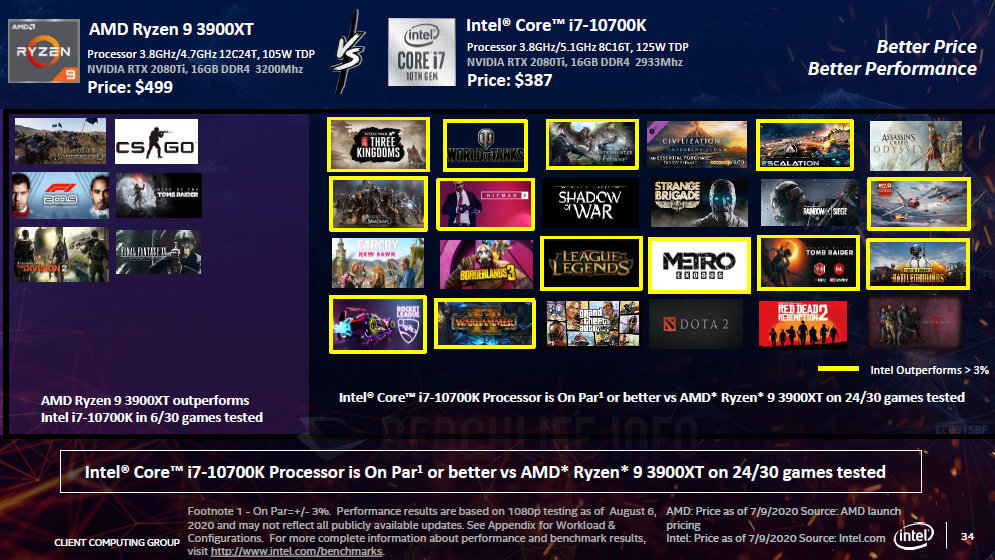