Intel has released a new set of Gaming and real-world benchmarks which compares its 10th Gen Comet Lake-H CPU lineup against AMD’s Ryzen 4000 processors codenamed as ‘Renoir’. These are part of Intel’s internal ‘Real World Performance’ testing methodology, which has been criticized heavily in the past. We have already seen examples where Intel used different configurations when testing their own CPUs against the competing chips from AMD, giving their CPU lineup an unfair advantage in the end.

The Intel Core i7-10750H CPU packs 8 cores and 16 threads, and is based on a 14nm process node having 2.60 GHz base and 5.00 GHz boost clocks, and the TDP is configured at 45W. Whereas the AMD Ryzen 7 4800H is an 8 core and 16 threads APU, fabbed on a 7nm process node, and is having 2.9 GHz base and 4.2 GHz boost clock speeds, respectively. One important thing to note here is that the 45 Watts TDP of the core i7 CPU is the PL1 state value derived at 2.60 Ghz clock speed, which is less than the actual PL2 TDP rating of 80 Watts, which is measured at 5.00 Ghz clock speed. So we need to take this info into consideration, because the AMD Ryzen 7 4800H APU maintains its clock frequencies within the 45 Watt TDP envelope.

Coming to the Gaming and real-world benchmarks, Intel has used two similar laptop configurations for both these CPUs this time. The following laptop Models were used, the Lenovo R7000-2020 (AMD) and Lenovo Y7000-2020 (Intel). The full specs are listed below courtesy of ‘Benchlife’.

Both the laptop models feature an NVIDIA GeForce GTX 1650 Ti discrete GPU, 16 GB of DDR4 Dual-Channel memory, a 512 GB SSD, 1080P HD display and were running on the same Windows 10 Home V1909 18363.836 OS version, with the only exception being the Memory spec which was configured at 3200 MHz for the AMD platform vs 2933 MH on the Intel system. Intel tested a total of 36 games at their default settings.

Out of 14 games which were tested, the Intel Core i7-10750H got 10% higher FPS on average than AMD’s APU. Tom Clancy’s Division 2 saw a 37% gain in performance, which was the highest. Intel also claims that its own CPU showed an overall better gaming performance than AMD’s Ryzen 4000 APU in several popular e-Sports gaming titles, such as PUBG, World of Warcraft, League of Legends, Dota 2, CSGO, GTA V and Call of Duty Warzone. Apart from this, in 21 gaming titles which were tested, the Intel CPU got more than 3% better average performance than the AMD Renoir APU. ‘Rise of The Tomb Raider’ game on the other hand saw a tie in performance between these two CPUs.

Intel also claims a 25% better performance in productivity workloads as well, such as Powerpoint, Excel, Chrome, and other popular synthetic benchmarks. But Intel did not go for any multi-threaded intensive benchmark, in which AMD easily dominates, so their testing methodology remains controversial. Back in June, Intel’s CEO Bob swan stated that the industry should stop focusing on benchmarks, and they should instead focus on the ‘Benefits and Impact’ of the Technology. But despite all this, INTEL is still relying on its own internal benchmarks. Nevertheless, the following PC games were tested:

Games with performance difference of more than 10%:

Games having performance difference of more than 3%, but less than 10%:

Game(s) having almost the same performance, on par: 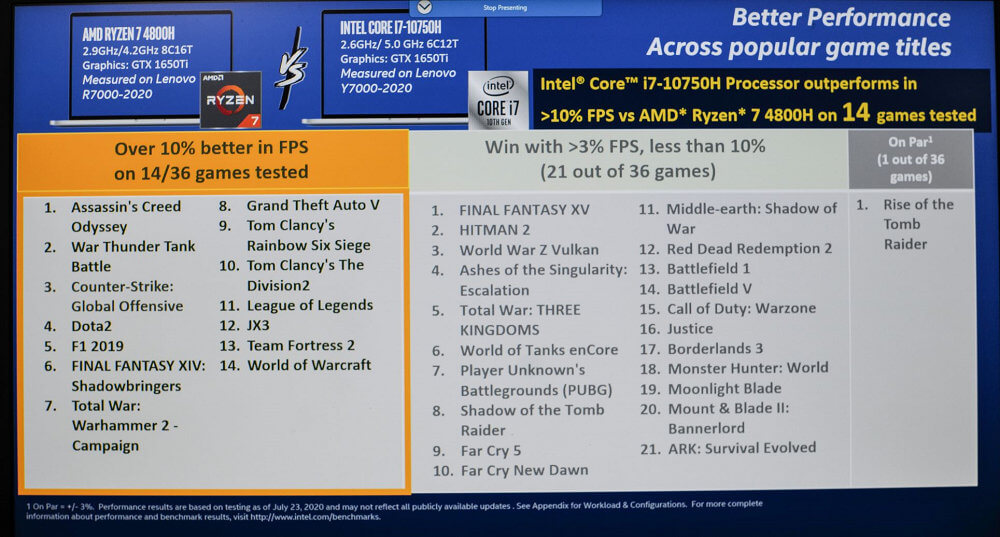 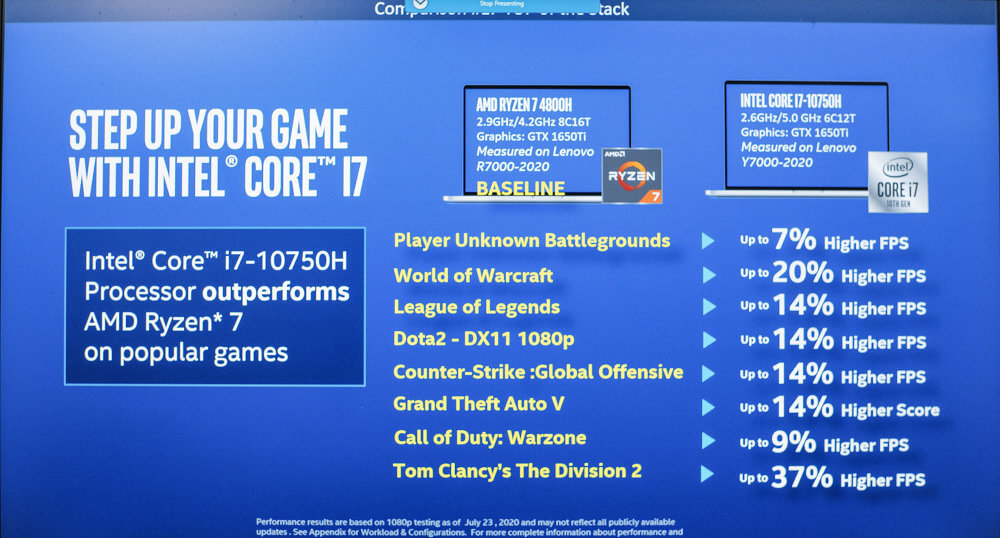