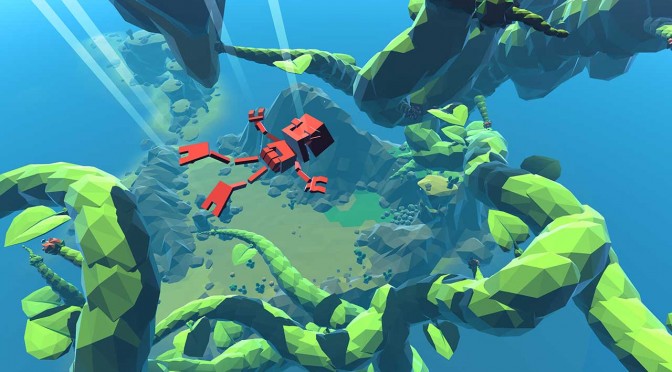 Ubisoft has announced Grow Home, a quirky, experiential climbing game being developed by Reflections, a Ubisoft studio based in Newcastle, UK. Grow Home will be available for download via Steam for PC on February 4.

According to the press release, in Grow Home players are free to explore the strange, open world full of floating islands, majestic caves and waterfalls, all set in a beautiful and minimalist artistic style.

Players take on the role of BUD (Botanical Utility Droid), an excitable, child-like robot sent on a mission to search the galaxy for a new species of plant that can oxygenate his home world. By growing and directing the giant Star Plant into a towering organic sculpture, players reshape the planet and create a magnificent landscape that lets them climb to new heights. The game’s unique climbing controls and abilities challenge players to continually reach for higher ground, but one wrong move and it’s a long way down!

“Whether it’s BUD’s charming, procedurally generated animation, the awesome structure of the Star Plant players create or the beautiful landscapes, there is a peaceful, innocent vibe about Grow Home that makes the game utterly unique”

Started as an experiment within the Reflections studio by a small team of eight talented developers, Grow Home offers the opportunity to discover a singular open-world based on two main pillars: Climbing and Exploration.

*Climbing: The world of Grow Home is built for vertical exploration and the unique climbing mechanic brings unprecedented freedom. Players control BUD’s hands independently to grab onto any surface, scaling the giant Star Plant as it grows and expands.

*Exploration: There are no set paths in Grow Home. Players are free to explore the many micro islands and hidden caves in this fun and beautiful open world. Every island encountered is scattered with hidden crystals to power the players’ journey and expand their abilities