Gigabyte, a well-known manufacturer of PC hardware components, has just now announced the release of a new BIOS firmware for its AMD motherboard lineup. Other motherboard vendors are expected to follow suit.

This update also brings support for the new Ryzen 3000 XT series of processors, and has mitigation for the ‘SMM Callout vulnerability’ issue, which allowed attackers to perform any encoding and control the entire system through the management mode of the AGESA microcode on some AMD APUs.

In addition to this, Gigabyte said the company engineers worked closely with AMD to improve performance and also the overall end user experience. I have explained the SMM Callout Privilege Escalation flaw before under this topic, in which this new vulnerability allowed the attacker access to high levels of system privileges to the point of manipulating the AGESA microcode encapsulated in the firmware UEFI of the platform, to execute arbitrary code, without being detected by the operating system.

The latest beta BIOS for AMD X570 and B550 chipset is already available for download on Gigabyte’s website , while for the X470, B450, X370 and other motherboard chipsets it will be made available around mid-July. The X570 and B550 chipset series will receive the final BIOS version in the middle of July, whereas other motherboards will receive the formal finalized firmware BIOS around the end of July.

The latest firmwares for AMD 500 and 400-series motherboards include the AGESA Combo V2 1.0.0.2 and Combo V1 1.0.0.6 microcodes that will also effectively patch the previous SMM flaw vulnerability as explained before. However, Gigabyte will first give first priority to the new chipset series.

The BIOS can be installed in several ways, such as using Gigabyte’s own @BIOS , and Q-Flash utilities. With Q-flash, X570 and B550 motherboard users can easily update the BIOS/firmware without even having an installed processor, memory or GPU on their system, so that they can easily enjoy the new BIOS and take full advantage of the new processors after the update.

The full timeline can be viewed under this table: 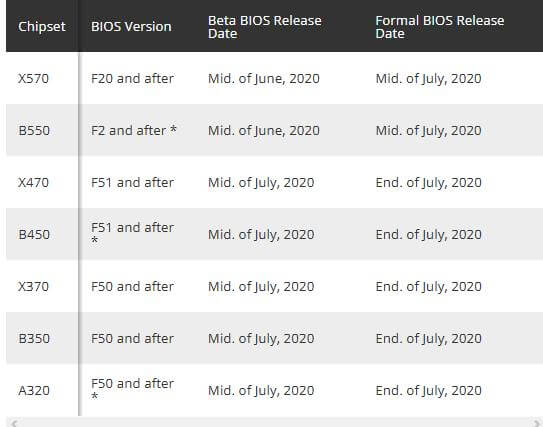