Yesterday, we informed you about a rumour regarding the release date of Assassin’s Creed: Rogue for the PC. According to Czech retailer Playman’s listing, AC: Rogue is coming to the PC this April. However, today our reader ‘Matteo De Marco’ has informed us about a listing from Gamestop Italy, suggesting that this latest old-gen AC title will hit the PC on March 10th.

Matteo De Marco has captured an image from this listing that can be viewed below. For the time being, Gamestop Italy still lists Assassin’s Creed: Rogue for a March 10th release on the PC. 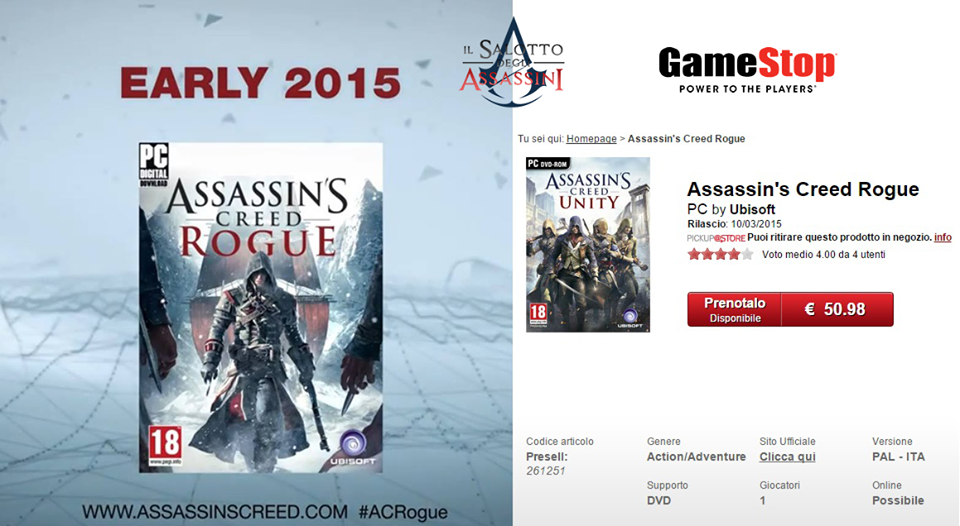 Since Ubisoft has not revealed anything official yet about the release date of Assassin’s Creed: Rogue, we strongly suggest taking this with a grain of salt. Still, this date does not look like a mere placeholder.

It will be interesting to see whether the game will hit the PC in March or in April.

Ubisoft has just confirmed that Assassin’s Creed: Rogue will release on March 10th, and that the PC version was handled by Ubisoft Kiev.

Moreover, Ubisoft Kiev have partnered with Tobii Tech to integrate eye tracking input as a component of gameplay.

“This is the first game of this scale to offer this entirely new, complementary input to the keyboard and mouse. Players using the SteelSeries Sentry (with Tobii eye tracking) when playing Assassin’s Creed Rogue will experience true gaming immersion: as the player looks to the left or right of the screen, the camera will pan to accommodate the exploration of this new visual territory, creating an “infinite screen” experience.”