Gun Media has announced that Friday the 13th: The Game has sold over 1.8 million copies in its first two months, despite its rocky launch. And while the publisher did not reveal any platform numbers, we can predict the PC sales thanks to SteamSpy’s data.

According to SteamSpy, Friday the 13th: The Game has sold only 256K copies on Steam. As such, it’s safe to assume that most of the game’s revenue is coming from consoles. The game features mostly positive reviews on Steam, though its recent reviews are mixed. 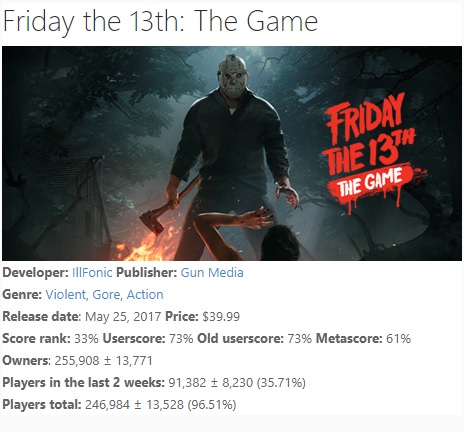 “It’s been a long two months from our team here at Gun and IllFonic. We have had an incredibly supportive and dedicated community since we launched, and while things haven’t been completely smooth we definitely feel confident moving forward. The team has grown and we are committed as we work to add more content, more kills, more to do and of course the single player component to the game.”