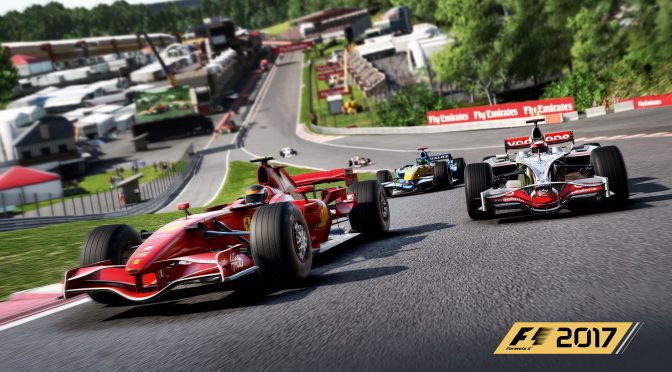 Codemasters and Deep Silver have today released the latest gameplay trailer for F1 2017, the official videogame of the 2017 FIA FORMULA ONE WORLD CHAMPIONSHIP, showcasing the extensive Career Mode that makes it the most complete game in the franchise’s history.

F1 2017 has a massively-expanded Career Mode that introduces invitational events at key points during the regular F1 season, where you will get to drive 12* classic F1 cars in a host of different events including overtake challenges, pursuit events, checkpoint, and time attack challenges. The classic cars are also playable in all other areas of the game, and can be raced as both single and multi-class races.

In addition to the invitational events, the Career Mode offers a huge amount of extra depth with 115 possible Research and Development upgrades (over 4.5 times as many as in F1 2016), new practice programs to master, and increased importance being given to the management and reliability of your car’s engine and gearbox elements.

As well as the 20 official circuits from the current season, F1 2017 introduces four new shortened circuits at Britain, Bahrain, USA and Japan, while also allowing players to take on the iconic Monaco street circuit at night, complete with stunning visuals.

“The Career Mode was a big hit last year and we are building on those incredibly strong foundations to create an even deeper, more rounded experience for F1 2017. We have added female driver avatars, new paddock locations and a new character as well as greatly increasing the scope for developing your team and car. All of this, we feel, combined with the addition of the iconic classic cars this year, means that F1 2017 offers gamers the ultimate F1 experience.”