Turn 10 Studios and Microsoft have revealed the official PC recommended requirements for Forza Horizon 3. According to them, PC gamers will need an Intel i7 3820 (@ 3.6GHz) with an NVIDIA GTX970 or an AMD R9 290X, 12GB of RAM and 55GB of free hard-disk space.

“From basic options like full screen, vertical sync, and resolution, to more advanced adjustments like quality settings for motion blur, mirrors, reflection, static and dynamic geometry, we’re giving Windows 10 players the power to play the way they want. Whether playing on the recommended specs or pushing the hardware limits to deliver the ultimate 4K racing experience, Forza Horizon 3 players will have lots of options for making the most of their experience.” 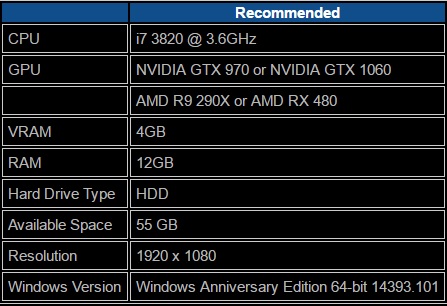