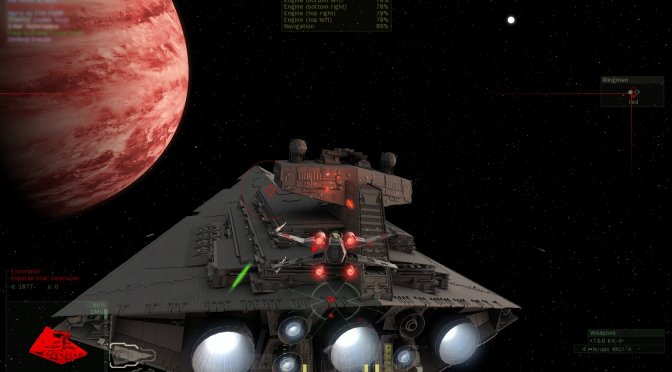 The FotG team has announced a new free first-person space combat Star Wars game, Fate of the Galaxy. Fate of the Galaxy promises to feature the incredible starfighter battles of the Star Wars Original Trilogy. In order to showcase the game’s current development state, the team released a gameplay teaser trailer.

Fate of the Galaxy is a singleplayer and multiplayer total conversion for the FreeSpace 2 SCP engine set in the Star Wars universe. Instead of seeking to recreate the experience of some of the previous LucasArts X-Wing Space Simulation games, the team in basing its mod almost entirely on the Original Trilogy. Furthermore, the team will strive to reproduce the feel from the space combat scenes in those movies as accurately as possible.

The team has gone to great lengths to accurately model the ships as they were seen on screen. As such, the team aims for authenticity and will try to make everything look just like you remember.

Unfortunately, this isn’t an official PC game. As such, we don’t know whether Disney will shut it down. It’s also worth noting that the team has been working on it since 2007. Therefore, it will be interesting to see whether it will be able to at least release a demo of it.

Fate of the Galaxy Teaser Trailer