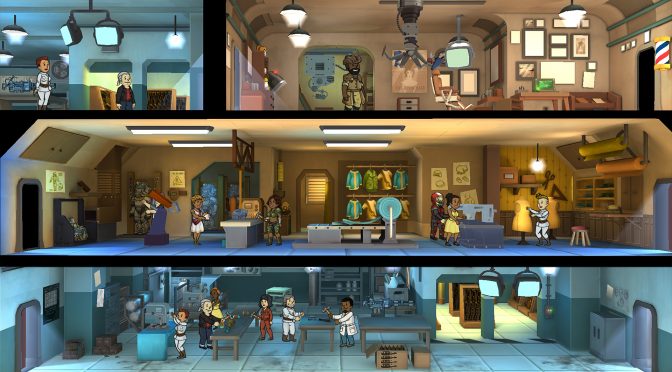 Bethesda has revealed that Fallout Shelter, the award-winning game by Bethesda Game Studios that thrusts players into the role of an Overseer managing their own Vault and an army of Dwellers, has surpassed 100 million users across all platforms.

According to the press release, that’s more than a billion Dwellers sent out to explore the Wasteland, scavenging for materials and battling Raiders, Radscorpions, and Ghouls. Furthermore, more than 7.5 billion game sessions have been played for more than 385 million hours.

Bethesda is celebrating this incredible milestone with a special 5-day giveaway that begins tomorrow, September 15th. Overseers can login each day of the celebration to receive significant daily rewards that will add up to $10 of in-game loot, including Lunchboxes, Nuke Cola Quantum, and special items to help survive the Wasteland.

Fallout Shelter thrusts players into the role of Overseer to build their own Vault, manage dwellers, and adventure through Fallout’s iconic wasteland. Since the game’s original launch in 2015, the game has continued to expand and add features, including Crafting, Scrapping, Pets, additional rooms, iconic Fallout 4 characters, and special Dweller customization options. The game’s constantly growing Quest system allows Overseers to send Dwellers out into the Wasteland to abandoned buildings, decrepit Vaults, and mysterious caves to uncover legendary loot and face off against enemies like Radscorpions, Ghouls, and powerful bosses.