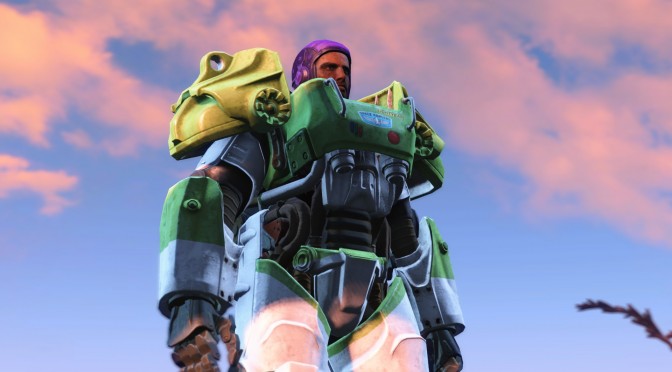 To infinity and beyond. Modder ‘Sorenova’ has released a new mod for Fallout 4 that replaces Paladin Danse’s armor with Buzz Lightyear’s armor from Toy Story. And whether or not you are a fun of Toy Story, we believe you can agree that this is really cool and shows the potential of Fallout 4 modding. Now imagine what will happen when the game’s mod tools get released.

As Sorenova noted, players will have to have Danse as a follower to equip the Buzz armor on him. Right now, this is the only way you can switch Danse’s armors. Sorenova claimed that  it’s almost impossible to replace his default armor without access to the Creation Kit. Still, the good news is that this mod will be updated with better versions once the Kit is made available.

Here is how you can equip Danse with Buzz Lightyear’s armor:

1) Find Danse and get him as a companion. 2) Take a set of Buzz Lightyear BoS armor from one of the Prydwen stations. 3) Activate trade with Danse and put them in his inventory. (don’t bother with the helm) 5) HOOD! If he isn’t already wearing it or doesn’t have it in his inventory, type ‘player.additem e1a39’ to add it to your inventory, equip it on him the same way you did the armor.