Prey 2’s development mayhem keeps delivering. A couple of days ago, we informed you about a rumor suggesting that Arkane Studios, the team behind Dishonored, might be rebooting Prey 2. Naturally, these are just rumors, however a lot began wondering what had happened with Human Head Studios. And from what Jason L Blair, a Human Head former employee, shared, it seems that the company had a working version of their vision up and running.

As Blair claimed, Human Head Studios’ Prey 2 was not a mere demo. Not only that, but Blair said that Prey 2 was fun and that it deserved to be released.

But why did Bethesda decide to put it on limbo if it had a working version of it? According to Blair, Prey 2’s cancellation was a political game and the recent Arkane rumor gives new life to some old lies (that unfortunately Blair did not share).

NeoGAF’s member ‘Messofanego’ has managed to capture all of Blair’s tweets, and you can view them below.

As we can clearly see, Blair is bitter about this whole thing. And we are pretty sure that gamers will be also pissed off with what Bethesda has done – if what Blair said was true – as Prey 2 had a lot of potential.

Prey 2 was powered by the id Tech 4, and was tweaked in order to handle open-world environments.

If Bethesda gives the green light to Arkane Studios, we can almost be certain that the ‘new’ Prey 2 title will be powered by the Unreal engine, something that may backfire at the end. Still, Arkane is talented enough, so it might surprise us.

As of right now, nothing has been confirmed or denied. Let’s hope that Bethesda will clarify things up sooner than later. 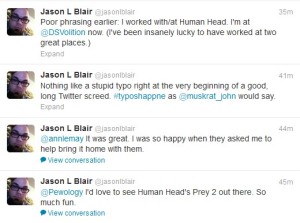 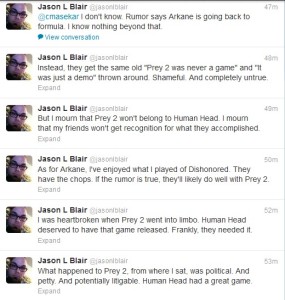 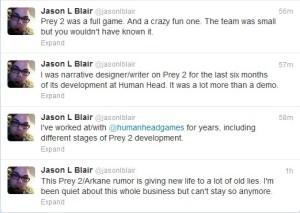 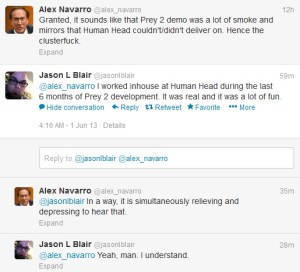