It appears that Epic Games is acquiring Mediatonic’s parent company Tonic Games Group for an undisclosed sum, the company announced on Tuesday. Tonic Games is the development company behind the smash-hit sensation, Fall Guys: Ultimate Knockout.

For Fall Guys fans, the gameplay isn’t changing and Epic will continue to invest in making the game a great experience for players across platforms.

As per the FAQ posted on Mediatonic’s Blog, Fall Guys: Ultimate Knockout will remain purchasable on Steam and PlayStation. If you own the game on these platforms, you’ll still be able to play it from there and will receive future updates.

However, there are no plans right now to make the game free-to-play (it currently costs $19.99). The developer is still bringing the game to both the Xbox and Nintendo Switch platforms as well.

This acquisition might bring EPIC Game monetization across multiple platforms, despite Fall Guys built using the Unity game engine. On the developer’s side, nothing is changing at Mediatonic, as everyone will keep their jobs, and the devs now get the backing of Epic Games as well. 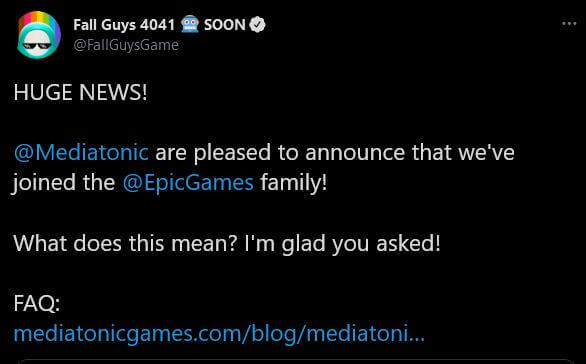 Mediatonic goes on to explain why did the company choose Epic, “We’ve been mutual fans for a while and as we’ve gotten to know the Epic team better, it turns out we have a lot in common and share a lot of the same goals. They really love Fall Guys and our team at Mediatonic.

We’ll continue to be the same team, working on the same game, but we’ll now have the full power of Epic Games to help us take the game to new (dizzying) heights.”

Back in December 2020, as John reported, Fall Guys sold over 11 million units on the PC.

“At Tonic Games Group we often say that ‘everyone deserves a game that feels like it was made for them.’ With Epic, we feel like we have found a home that was made for us.

They share our mission to build and support games that have a positive impact, empower others and stand the test of time and we couldn’t be more excited to be joining forces with their team.” – Dave Bailey, Tonic Games Group Co-Founder and CEO.

“Beyond the shared vision among our teams, we see tremendous potential in combining forces with Epic. Whether it’s about making our own games the best they can be or empowering other game developers to take their content from a kernel of an idea to commercial success, we know that together we will be able to reach greater heights.” – Paul Croft, Tonic Games Group, Co-Founder and Chief Games Officer.

“It’s no secret that Epic is invested in building the metaverse and Tonic Games shares this goal. As Epic works to build this virtual future, we need great creative talent who know how to build powerful games, content and experiences.” – Tim Sweeney, Epic Games Founder and CEO.

The acquisition includes Mediatonic and Fortitude Games, both of which are owned by parent company Tonic Games Group, which announced the deal with Epic today.

Fall Guys is a massively multiplayer party game with up to 60 players online in a free-for-all struggle through round after round of escalating chaos until one victor remains.

Players can dive into a series of ridiculous challenges and wild obstacle courses with masses of other competitors online. Players can also shift between competitive free-for-alls and cooperative challenges. Moreover, players can watch in delight as their fellow competitors bend, bounce, and bash their way to hilarious, physics-based failure.