This is not the first time EA has done such a thing. A while ago, the company promised 5 vehicles unlocks for the base game with the Armored Kill DLC. Unfortunately, that never happened and a lot of BF3 fans (and owners of Premium) got annoyed and upset. Seems that EA and DICE have not learned from that lesson, though.

On the other hand, BF3 already features a large number of weapons, and – truth be told – we don’t really want to see more weapons to it. Furthermore, DICE has originally promised 20 weapons for Premium owners and have delivered (Karkand added 10 weapons and Close Quarters added 10 more (meaning 20 in total). However, we are certain that some Premium owners were looking forward to the weapons that were announced for Aftermath and since they were promised to be featured, they should be there.

EA has silently removed the additional weapons from both Aftermath’s and End Game’s profile pages in Battlelog. Below you can find a Battlelog screen-grab from the premium section (3 months ago screen is on the left, while today’s shot is on the right). Now imagine if EA and DICE did this for a game-mode, or a map, or whatever feature they felt was unnecessary. This is unacceptable, at least in our opinion, because some gamers bought the Premium service with those features in mind, and you can’t go ahead and alter the content of a promised/planned pack… can you? 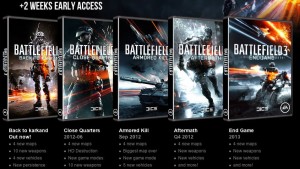 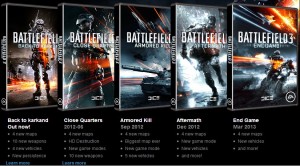