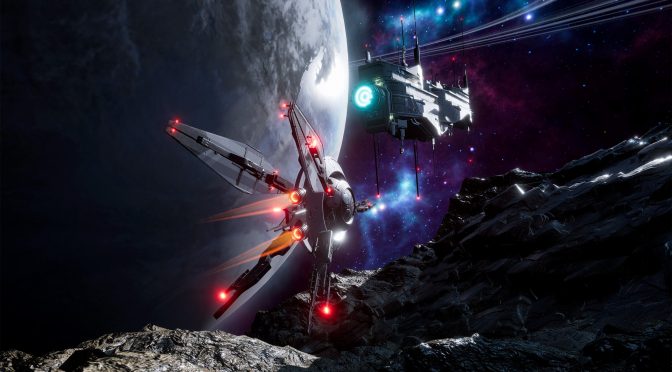 Third person space combat uses a “free look” system that allows players to aim and shoot in a different direction than they are traveling. According to the team, this is distinct from other space combat games that use a more airplane-like control scheme. This flight model will allow FPS players to quickly pick up and play.

From ships and battle craft, players launch one-man assault pods to perform the risky and aggressive “breach and board” tactic. This maneuver seamlessly transitions the player from third person to first person combat modes.

“While games like Star Citizen and Dreadnought do an incredible job of creating the epic atmosphere in the vastness of space with incredible ship design, and sci-fi FPS games such as Halo and Destiny are kind of like operatic first person shooters, we thought it would be fun to fuse the two genre types into one game, but focus specifically on tactical combat and team-based competition. As an indie studio, we look up to the inspirational scale and scope AAA teams can achieve. Project Genesis gameplay is more compact. It also lets players team up and jump into tactical aerospace combat and FPS infiltration assaults quickly.”

The team promises to release new builds of major features and fixes every other month. However, early adopters may also see new builds arriving per week. The team feels this pace keeps the game fresh with frequent improvements. It will also allow for iterating on community feedback in short timeframes.

Lastly, it’s worth noting that some of the developers that currently work at 8 Circuit Studios have worked on games like Super Mario World, Age of Empires, Mech Warrior IV, F.E.A.R. 2, World of Tanks, Shadow of the Tomb Raider, and Halo 5.

Below you can find the game’s Early Access launch trailer.