You’ve heard the rumors that Valve is secretly developing Half-Life 3, right? Wait, those were the same rumors with the development of Episode 3 but nevermind that for a second. And in case your mind plays tricks to you, we should remind you that easter egg that hinted to the Half-Life franchise in Portal 2. So look and behold as Valve is teasing us for one more time with a game that pretty much everyone wants to play. Damn, is Valve trying to steal Duke Nukem’s title as the best and longest vaporware game in the gaming history? Seems so but no our dear Valve, nothing will top Duke.

Long story short: At a local game developer event, a Valve employee wore the following Half-Life 3 T-Shirt. Now before jumping to early conclusions, this does not meaning anything in our humble opinion. Every employee can print and wear whatever T-Shirt they want. Hell, he could wear a T-Shirt with Gordon making sweet love to Duke Nukem. Would this mean that a crossover between Half-Life and Duke Nukem Forever was in the works? No, no and no. 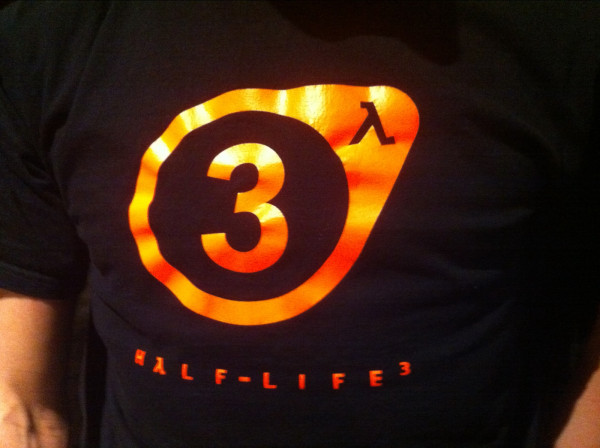 Apparently this employee wanted to tease all those gamers that would be there. Or this is indeed a Half-Life 3 hint. But, who really cares. Damn, even Black Mesa hasn’t been released yet. By the time Half-Life 3 will be finished, the world will be going straight to hell as the Mayas have foretold. For all we care, we can even bet that Valve will be giving away the game’s beta code to Satan in order to attone for their sins.

So there is nothing to get excited, trust us. Move along and forget Half-Life 3 for the time being!