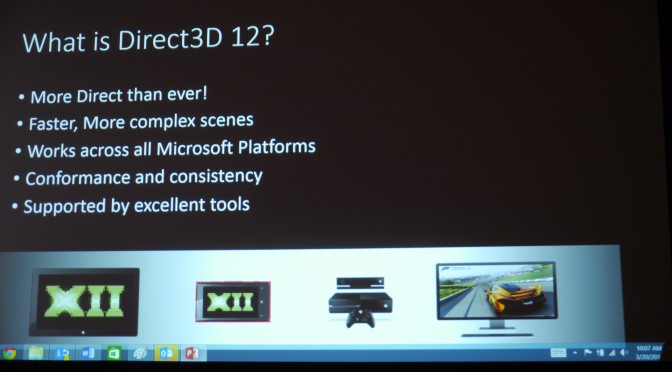 During this year’s GDC, Microsoft has unveiled its latest DirectX API, DX12. DX12 will be a faster API than its predecessors, and will let developers create more complex scenes. This new API will work across all Microsoft platforms, and will be supported by excellent tools.

DX12 will come with new rendering features, a lower level of abstraction than ever before, resource management improvements and will address state and rendering overhead.

The first application that will take advantage of DX12 will be Futuremark’s 3DMark.

As Microsoft noted, the CPU performance has not improved at the same rate during these past years compared to the GPU performance. This difference rate of increase is a big challenge for the DX API, which is why MS is bringing this new API.

DX12 will be better optimized for multi-CPUs. As we all knew, in DX11 one core was doing most of the work. In DX12, however, the overall CPU utilization will be down 50% and the workload will be more spread out.

What’s also interesting here is that according to AMD’s slide, existing customers will benefit from this new API from the get-go. This may mean that DX12 will be backwards compatible with DX11.1 GPUs. Nvidia has also announced that it will support DX12 on Fermi, Kepler, Maxwell and forward.

The first DX12 games will be coming in late 2015. A preview release of DX12 will out later this year, and there will be an Early Access program for this new API.

Enjoy and stay tuned for more. Also kudos to PCPer for its live blogging!