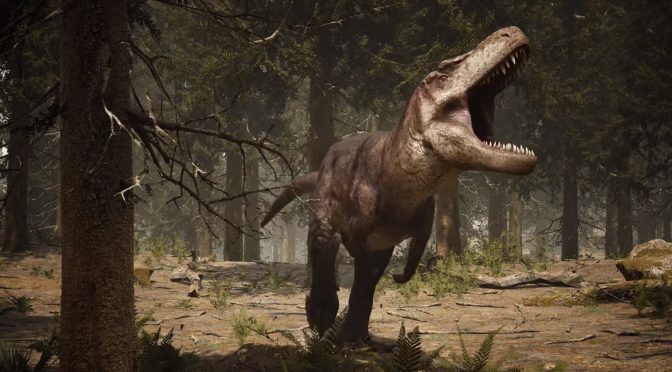 Alderon Games has issued a press release for its upcoming dinosaur survival MMO game, Path of Titans, revealing its release date. In Path of Titans, players will be able to play as a dinosaur in a rich ecosystem. The game promises to feature complex AI creatures and up to 200 other players per server. Dinosaur enthusiasts will also be able to explore an environment filled with activities and natural events. Moreover, players will be able to customize their dinosaur to suit their play style.

The game will feature over 10 playable dinosaurs to choose from at launch. Each dinosaur will have its own unique playstyle, giving players a huge variety of gameplay freedom. For example, the semi-aquatic Suchomimus can snap up fish and the speedy Struthiomimus can outrun nearly anything. The game’s universe will continue to expand through 2020 and beyond with 15+ additional dinosaurs and several AI critters. These features were either crowdfunding stretch goals or backed by generous high value crowdfunding contributors.

Path of Titans will also bring cross platform play, where friends can game with one another no matter what device they might own. All players will connect to the same servers, and can seamlessly transfer their characters from one platform to another. Currently supported platforms include Windows, Mac, Linux, iOS, and Android, and the team is currently developing console support.

Path of Titans is also being developed with modding in mind. The game will support a huge amount of moddable functionality such as adding new creatures, maps, skins, sounds, and game modes. Once a player creates their mod, they can upload it to the Path of Titans “Cloud Cooker” that will automatically build, package for other devices, and distribute their work to the community so that anyone can enjoy their mod creation regardless of operating system or device.

Alderon Games aims to release Path of Titans in February 2020. A pre-release access will also open during December 2019.