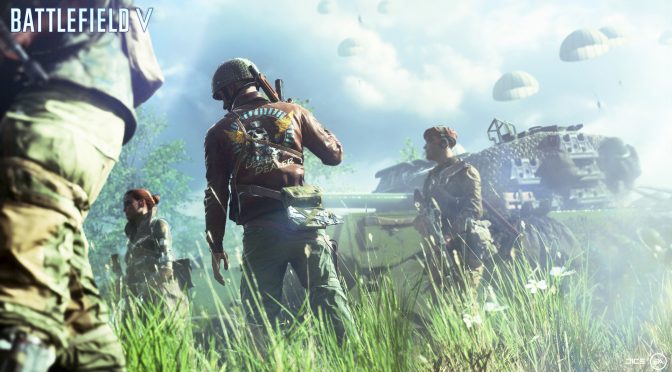 DICE has published a lengthy post in which it goes into more details about Battlefield V’s destruction, fortification, soldier movement, revive system, squads, new strategy decisions that will be available and gun play.

According to the developers, Battlefield 5 will feature a more impressive destruction system. As the battle rages on and structures collapse, players won’t see pre-determined animations – but dynamic sequences based on physics, materials, and the hardware being used. Players will be able to drive a tank into a building, and the debris will instead move inwards. No matter how a building is destroyed, different parts of it will crack, move, and then crumble in a more time-extended way than in previous titles.

Battlefield V will introduce a new Fortifications system. Players will be able to build various types of military assets thanks to Fortifications: foxholes, sandbags, barbed wire, tank stoppers, and more, and they can reinforce buildings that have been destroyed. The aim of the Fortifications system is to lead to much more dynamic gameplay. For example, if you want to hold a flag, you can use Fortifications to close entrances to control points and funnel enemies towards you.

In Battlefield V, bullets will go where you have your sights and there will be no random bullet deviation. However, there will be bullet drop over longer distances, and the game will feature bullet penetration.

Regarding Squads, Strategic Decisions and the Revive System, DICE had this to say:

Moving on to Squad Play, there’s one key thing to know about Battlefield V: your squad will be more important than ever. Staying close to your squad, communicating with it, and playing well with it – this will all pay off. To facilitate this, you’ll be automatically placed in a squad when jumping into Battlefield V (though you can leave it if you want). We’re improving the communication options, so regardless of where you are – in game or in a loading screen – you’ll be able to chat with your squad mates.

Bringing a downed team mate back into action with a revive has always been an exciting move in Battlefield, but for Battlefield V we hope to make this action even more intense – and personal.

One key change: the non-Medic Classes will also be able to perform revives – if they’re done on a squad mate. Staying close to your squad will thereby be even more helpful. These squad revives won’t mean the Medic will be devalued though – quite the opposite. Revives by a Medic are much faster, can be used on all team members, and will bring a teammate back to full health, which squad revives won’t.

We’re also adding a short physical interaction to the revive, meaning that you will be face-to-face with your teammate – no matter which end of the syringe you’re on. Seeing the face of your buddy (not to mention seeing each other’s visual customizations) will hopefully be a cool little moment. You’ll be able to revive from many angles, meaning you’re putting yourself less in harm’s way.

Speaking of revives brings us to another new addition: dragging a teammate to safety. Say you’re playing on a high-octane map and a downed teammate is calling for help from a meat grinder area. Going for a revive in this situation has historically been a suicide mission. Your odds will be a lot better in Battlefield V. Run to your teammate, drag him to safety, and revive behind cover. You’ll feel like a hero (and score some more squad points).

Scarcity and War of Attrition will Give You More Strategic Choices

Attack a point – take damage – heal – rinse and repeat. In previous Battlefield games, your strategies were often quite similar from attack to attack. Full health regeneration and a high availability of ammo are two reasons for this. In Battlefield V, we’re adding a layer of scarcity of health and ammo. This will create new challenges when you approach new situations and more player choice.

Let’s say you spawn into a Battlefield V Conquest match. Now, you can still head straight to the point you want to attack, but you may want to bring a Support player with you to not risk running out of ammo. Alternatively, if you want a well-prepped attack, you can gear up at one of your control points’ resupply stations, which can be built through the Fortification system.

Then, after you’ve attacked, taken damage, and spent ammo, you find yourself behind cover, planning your next move. Your health will regenerate to some extent, but you won’t fully heal like in previous Battlefield games. Now, you have several options. You can try to flank the enemy point, you can rush the battlefield and loot downed enemies for ammo, you can find a Medic, or you can find a resupply station.

The scarcity element can of course be used offensively as well. Do your enemies have a tight grip on a flag your team is fighting for? Destroy some enemy supply stations on other flags to make your foes sweat and change their tactics. Overall, we want you to be mindful of resources, and add a new meta layer of strategy.

This will by no means make the game slower, though – this is still the hi-octane, fast gameplay that you know from Battlefield. And you can still be a lone wolf, just stock up in the resupply station or loot enemies. It’s all up to you.

If You Work Together, You Can Unleash the Squad Reinforcements

Another cool addition that will make you want to stick with your squad is Squad Reinforcements. Here’s how it works: when you’re working together as a squad, you’ll accumulate resources. Eventually, you will have gathered enough to give the squad leader the possibility to call in various reinforcements – which might be very powerful and turn the tide of the battle.