Now this is interesting. We all know that DICE will implement Mantle in Battlefield 4 as a means to test waters and see what benefits this new API will bring to the table. What we did not know, though, is that there are currently 15+ titles that will benefit from the implementation of Mantle in DICE’s engine.

This information comes straight from DICE’s Johan Andersson. When a fan asked whether the future games powered by Frostbite 3 will support Mantle, Andersson responded and claimed that all 15+ titles that are being created with Frostbite will support it. 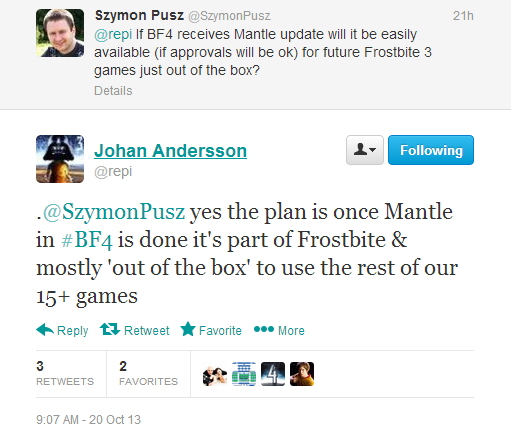 So, 15+ titles? Let’s see. We do know that DICE is working on Battlefield 4, Mirror’s Edge, and the new Battlefront game. We also know that Need For Speed: Rivals will be powered by Frostbite 3, and that Dragon Age: Inquisition, Plants vs. Zombies: Garden Warfare and the next Mass Effect game will be built on that engine. That’s seven titles.

The interesting thing here is that the question was for future games, powered by Frostbite 3. Since Andersson claimed that there are 15+ titles that will be able to support Mantle mostly out of the box, this could very well mean that EA has probably more games – that have not been announced yet – that will be powered by DICE’s latest game engine.

If that’s not the case, though, it means that older games will also benefit from such a move. In other words, PC gamers can expect better performance via Mantle on games like Command & Conquer, Bad Company 2, Battlefield 3 and Need For Speed: The Run. Still, we find it hard to believe such a thing, as the development teams would have to release patches with Mantle support for them, and that’s unlikely to happen… especially for games such as NFS: The Run.

In other news, Johan Andersson confirmed that Frostbite 3 does not have any optimizations that work only on Win8.1 and not on Win8. As you may know, Andersson has been constantly saying that the best alternative to Mantle – with regards to Battlefield 4, thus all Frostbite 3-powered games – will be Win8 + DX11.1. And at this point, there won’t be any performance differences between the latest Win 8 OSs.

Enjoy, and stay tuned for more as AMD is currently gearing up for its November event, in which it will unveil more about Mantle.