Starbreeze has announced today that Dead by Daylight has sold more than 3 million copies across all platforms and formats. While Starbreeze did not reveal any specific platform data, it’s pretty obvious from Steamspy’s data that most of its sales are coming from the PC. 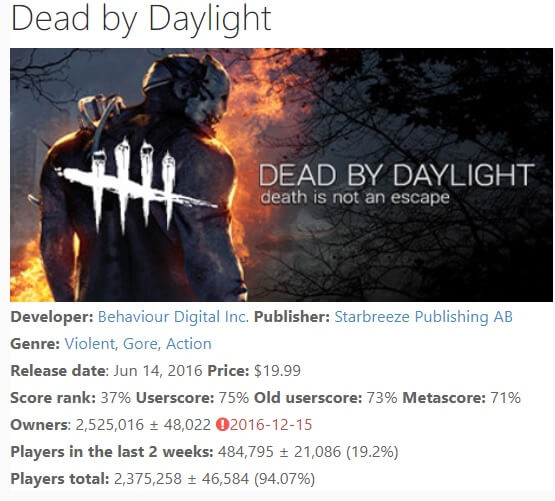 Dead by Daylight is an asymmetrical multiplayer horror game. In it, one crazed killer hunts four friends through a terrifying nightmare. Players take on the role of both killer and survivors in a deadly game of cat and mouse.

Survivors play in third-person and have the advantage of better situational awareness. On the other hand, the Killer plays in first-person and is more focused on their prey.

The Survivors’ goal in each encounter is to escape the Killing Ground without getting caught by the Killer – something that sounds easier than it is, especially when the environment changes every time you play.

The game came out in 2016 on the PC. As such, it took Starbreeze over one year in order to hit its 3 million goal.