If you’ve been following us, you’ll know that we respect and love Crytek’s first game. Contrary to most PC gamers though, we didn’t mind whether Crytek decided to port it to the consoles. Obviously, we want console gamers to experience one of the best 2007 PC games and we are – kind of – glad that Crytek is bringing this acclaimed shooter to both X360 and PS3 this October. You can check out its debut trailer – courtesy of GameTrailers – and an early comparison shot after the jump.

It’s pretty obvious from this early comparison that the console version has lower resolution textures. In fact, it looks a bit ugly. SSAO is nowhere to be found – or was toned down – and although Crytek claims that they used a new lighting system, the results of that change are not as good as we’d hoped to. Our guess is that Crytek chose a different lighting method in order to scale down the game as good as they could and not to offer better or similar visuals. Reflections are also toned down as can be easily spotted.

Now this early comparison is based on some compressed video samples but still, it gives a pretty good idea of what to be expecting. Even if we take account that Crysis X360/PS3 doesn’t show its full potential in the following video, the same can be said about Crysis’ PC version screen that is captured from a video too. Additionally, the environments look way too empty. Crytek obviously reduced the amount of trees and bushes in order to save some resources. By reducing them though, the overall experience will be impacted negatively as… well… cutting trees and the firefights in the jungle were among Crysis strongest features. Still, for a console version, it does look good although it definitely looks dated by today’s standards. Crysis X360 is on the left whereas Crysis PC is on the right. 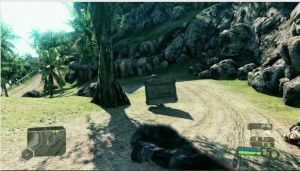 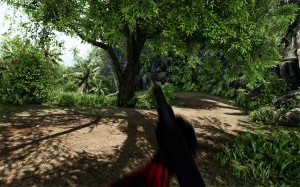