Okay everyone, this is ridiculous. We don’t know whether or not Capcom is doing it intentionally, but this ‘spelling errors’-thing needs to stop. Yesterday, we reported a spelling error in the latest trailer of Steel Battalion: Heavy Armor. Well, get ready because Street Fighter x Tekken suffers from some spelling errors that can be easily spotted in the Dino stage and in a stage that features a poster with El Fuerte.

In the Dino stage, we can easily notice a T-Rex in the background. All is good until we actually read the cage sign that reads ‘Dinasaur King’. Dina what? Kudos to Neogaf’s member ‘voodoopanda’ for capturing the following image. The other spelling mistake is not so obvious and will be noticed from those speaking Spanish. Spotted by Fenrir_Lilith, in El Fuerte’s poster, there is a sentence that is mispelled. Instead of ‘ALUN DIA’ it should read ‘ALGUN DIA’. 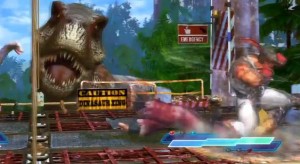 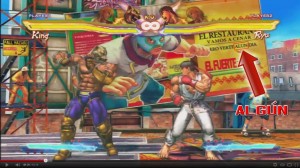