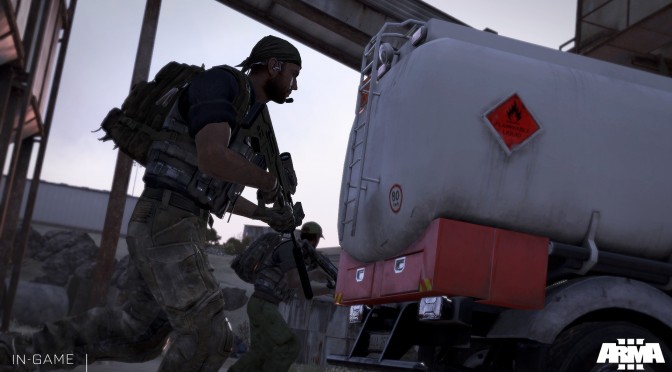 Platform updates are major enhancements to Arma 3, and will be available to everyone who own the game. Extending the Steam Workshop implementation (currently limited to player-created scenarios) to support mods is a key goal. Another important addition to Arma 3 will be the release of the Bootcamp update. This free package will give newcomers a varied introduction to the game, while veteran players can look forward to refinements of certain vanilla features.

Besides platform updates, Bohemia Interactive will also reinforce Arma 3 with downloadable content (DLC). Each exploring a specific theme, Arma 3 DLC will focus upon new sandbox assets, official scenarios, and features. Bohemia Interactive stipulates that DLC game features will be free to everyone, while DLC content will be paid. The studio is currently working on a plan to prevent a split in the multiplayer player-base, which will be explained in more detail in the next few weeks.

Bohemia Interactive’s first planned DLC is Arma 3 Helicopters, which is scheduled for release in the second half of 2014. The Helicopters DLC should feature new transport helicopters, an option to use Take On Helicopter’s RotorLib Flight Dynamics Model (FDM), plus several new game mechanics. The Helicopters DLC will be followed up by the Arma 3 Marksmen DLC, which should include new weapons and a focused overhaul of certain shooting mechanics.

The studio is also developing a major expansion for Arma 3, which is currently penciled in for late 2015. While much of the pre-production work for the expansion is still underway, the intention is to deliver a range of new sandbox content and features alongside a new terrain – which offers a distinctive feeling and gameplay.

Last but not least, the devblog post mentions that work on stability and optimizations, as well as large-scale MP performance, will continue. Together with the scheduled platform updates, downloadable content, the expansion, and the €500,000 Make Arma Not War contest – Bohemia Interactive intends to develop Arma 3 as a long-term platform.