Mass Effect 3’s ending left some questions unanswered and that’s precisely why BioWare decided to release the Extended Cut DLC for it. And although the free DLC answered a lot of questions, it didn’t reveal whether that figure in the ‘Destroy’ ending was actually Shepard or not. Thankfully, Tully Ackland, UK Community Coordinator for BioWare titles, has revealed what most of us already knew. Yeap, Shepard is alive in the ‘Destroy’ ending and that figure was actually him.

As Ackland revealed at BioWare’s forums:

“You may notice that in the “Shepard lives” ending, the love interest hesitates to place Shepard’s name on the wall, and instead looks up as though deep in thought. This is meant to suggest that the love interest is not ready to believe Shepard is dead, and the final scene reveals they are correct.”

So there you have it everyone, Shepard actually lives in one of Mass Effect 3’s endings. Questions is now whether BioWare will exploit that ending in order to offer a new DLC or not. And even though BioWare stated that ME3 would be the end of Shepard’s story, this ending shows that there are still possibilities for some new ME games with Shepard. 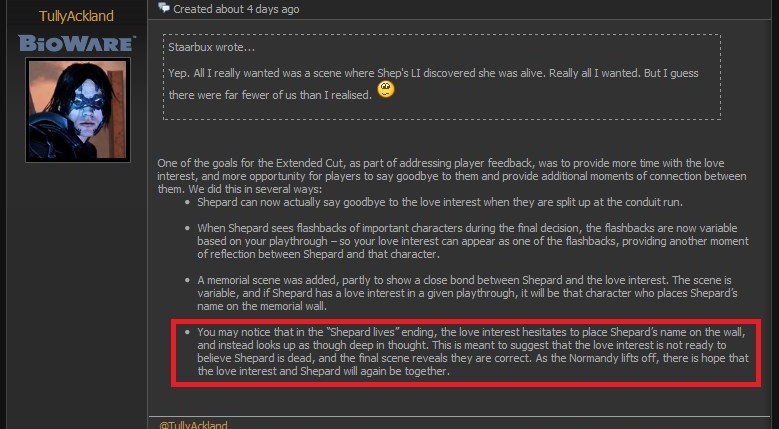