Even though Square Enix has not announced anything about Final Fantasy VII Remake coming to the PC, we are all pretty sure that this FF game will eventually hit our platform. The reveal trailer for FF VII Remake claimed that the game was coming first on PS4, indicating that a PC release – at a later date – could be possible. And today we were informed that one of the biggest Belgian game retailer sites has listed Final Fantasy VII Remake for the PC.

Gamemania is considered one of – if not THE – biggest game retailer sites in Belgium. And as we can see, it has Final Fantasy VII Remake available for pre-order on the PC. 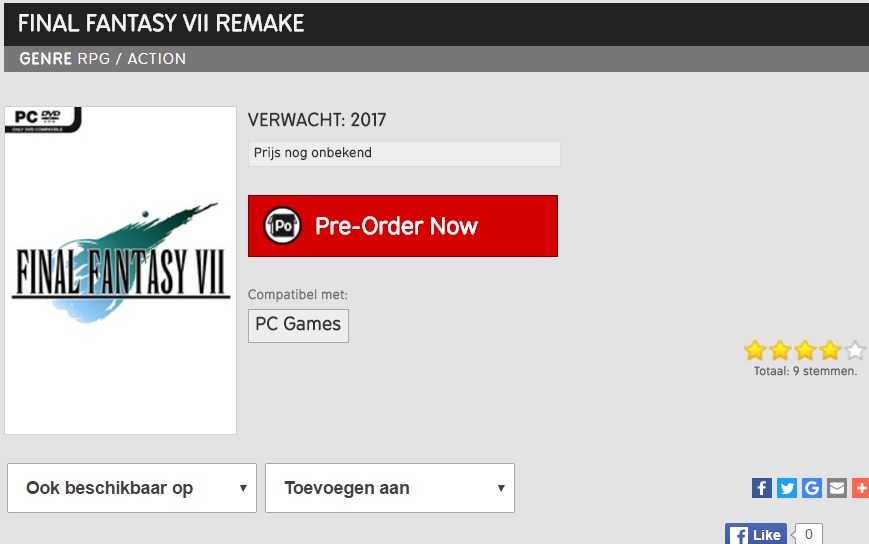 What’s really interesting here is that Gamemania does not feature any “fishy” listings. No Gears of War 4 for the PC for example. No The Last of Us PC and no Halo 5 PC. So yes, this could actually be a strong hit about a PC release for Final Fantasy VII Remake.

To be honest, though, we don’t expect anything to be announced at this year’s E3. Our guess is that the PC version of Final Fantasy VII Remake won’t be officially announced anytime soon, unless Square Enix surprises us.

Still – and while this has not been confirmed yet – the possibility of this game hitting the PC is very high.