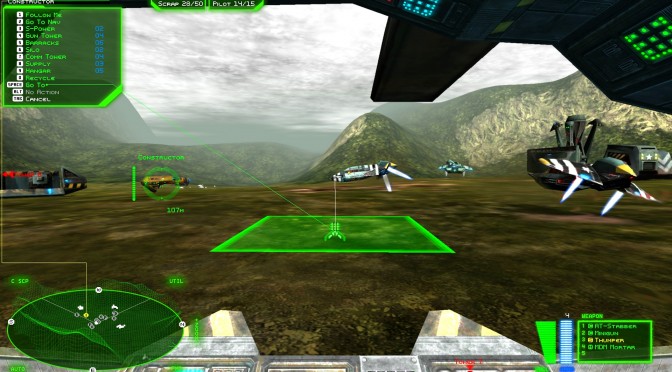 Rebellion has revealed some new tech details about the upcoming remaster of Battlezone 98. According to the team, Battlezone 98 Redux will be using a DirectX 9 renderer, will feature higher detailed terrains, and will sport a real-time lighting system.

“For starters, we introduced a shader-based DirectX 9 renderer which allowed us to use an all new shader/material system throughout the game. All vehicles and buildings were remodeled and retextured in high resolution and high polygon meshes. We also used advanced shader techniques to add a little glow and shine to the new models.

And what’s the point of shine if we don’t have lights? So of course we added headlights to all the tanks and adapted the system to allow for real-time lighting.

Speaking of lighting, we now have a real lighting system, and all game objects like vehicles and buildings cast shadows and self-shadow! You might be thinking that Battlezone had shadows in 1998, but really it just had blobs, not actual projected shadows with soft edges like Battlezone 98 Redux has.”

What’s also interesting here is that the game will feature a  completely re-designed in-game heads-up display (HUD) that will be scalable at higher resolutions.

“This also means that if you have a giant monitor you can now have your HUD scale up way high, or dial it back down if you’d prefer.”

“When an old map is loaded Battlezone 98 Redux takes care of upscaling and smoothing automatically, so it’s easy and quick to convert and modernize any map. “

Last but not least, Battlezone 98 Redux will come with Steam Workshop support and a host of in-game options for ‘pulling your new content into the game and running it.’