Our reader ‘Sean’ shared with us a workaround via which SLI owners can fix the annoying flickering issues that are currently present in Assassin’s Creed: Unity. In case you’re wondering, yes; this workaround is legit as we were able to eliminate all water and ground flickering issues with SLI enabled.

All you have to do is follow this guide. By doing the following changes, your game won’t flicker like crazy. We don’t know whether Ubisoft or NVIDIA is to be blamed for this mess, however we are glad that there is an unofficial fix for it.

1. Head over at Assassin’s Creed Unity/videos folder.
2. Rename file UbisoftLogo.bk2 (it doesn’t matter to what you rename it)
3. Rename file pc_TWIMTBP.bk2 (it doesn’t matter to what you rename it)
4. Go to “en” folder (located inside the videos folder) and rename both files that are in there. Do note if you are playing the game in other language than english, then you’ll have to go to the corresponding folder and rename the files. For example, if you are playing in German language, the folder name should be “de”.
5. Load the game and voila

We can also confirm that Assassin’s Creed: Unity is still a performance mess, even with the latest update applied to it. As you can see from the following graph, the game is still plagued with major stuttering issues (that are not related to SLI). In order to avoid any VRAM limitations, we dropped our resolution to 720p and as a result of that, our VRAM usage was around 1.6GB. In short, Unity’s stuttering issues are not related to VRAM usage, and are similar to those we reported a while back. 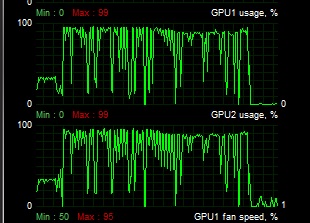 There are reports that Ubisoft is preparing another PC update for Unity. Whether this new update will resolve those annoying stuttering issues or bring the promised tessellation effects remains to be seen.