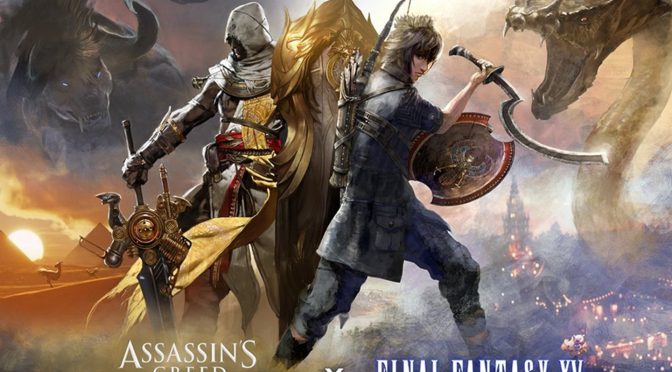 Ubisoft and Square Enix have both teamed up for a mutually beneficial surprise crossover promotion, called Assassin’s Festival.

Both Ubisoft and Square Enix have done something very intelligent marketing wise, injecting Assassin’s Creed into the Final Fantasy universe has smashed opened a door for in-game advertisement that could flourish for both games. This is not a sell out by Square Enix either as both sides of this deal mutually benefit, Final Fantasy players will see a bunch of new content that will re-engage players and Ubisoft has made an interesting partnership that allows for an in-game promotion that will hype Origins even more.

“In what started almost three years ago at an informal meeting during the Tokyo Game Show to express admiration for each other’s work, the Assassin’s Creed and Final Fantasy XV development teams have announced a collaboration that will result in the two franchises paying homage to each other’s gaming universes.”

“The collaboration kicks off on August 30, as Final Fantasy XV players who have obtained the Dream Egg from the Moogle Chocobo Carnival event will be gifted a very familiar Assassin outfit for Noctis. The very next day, August 31, will be the release of the free Assassin’s Festival DLC for Final Fantasy XV. The town of Lestallum will transform itself for the event with signs and banners signaling the arrival of the festival, and new activities will be available for players to participate in. It doesn’t end there. The Assassin’s Festival will have some additional themed items and features, including another outfit from Assassin’s Creed, along with abilities that enable Noctis to explore more like an Assassin and even use some of the Assassins’ more well-known abilities.”