ASRock has once again highlighted the benefits of its BFB overclocking feature for non-K CPUs in this latest video. In case you didn’t know, ASRock is allowing overclocking on non-K Comet Lake S CPUs, and non-Z motherboards, mostly the Z490/B460/H470/Z390/B365 chipsets.

From the latest video we can see the performance jump in Cinebench benchmark, as well as two PC games which have been tested, Far Cry 5 and Shadow of the Tomb raider. We can see up to 29% boost in Cinebench scores using BFB, though in gaming the framerate scores are marginal, but nonetheless the Games do seem to benefit from this new BFB feature. But Intel’s higher-end CPUs tend to benefit more from this OC technique than lower-end processors.

ASRock’s new BFB/Base Frequency Boost is an overclocking feature which works on non-K processors. It basically makes the processors to operate above the default stock values, on both the Z-series and B-series Motherboard chipsets. Thus, it gives the CPU a slight performance boost. BFB works by increasing the TDP of locked processors to the maximum PL1 value.

As we all know that OC is disabled on non-K locked INTEL processors, and although there are few tricks/tweaks, and BIOS editing which can be done to unlock and bypass this feature, it comes with a huge risk factor.

Base Frequency Boost feature alters the power states/limits of Intel processors, allowing for a higher boost clock value to be effective for a long duration. The motherboard vendor is actually increasing the processor’s PL1 (power level 1) state from the default value to the maximum value, and locking it at that higher value. The power limit has been increased. In ASRock’s example, the 65W Comet Lake CPU operates as if it was a 125W model. BFB technique helps with a Long term boost in the base frequency of the CPU, meaning the boost or increased clock is maintained for a longer duration.

By altering the PL1 value, ASRock is essentially tricking the CPU into running at a faster base frequency, which was not possible before. For example, the Core i9-10900 is a 65W CPU having a 2.8GHz base clock. ASRock’s BFB pushes the TDP above its default value, up to 125W, at which point the CPU apparently thinks it should be running at 3.7GHz.That’s a roughly 900MHz overclock.

Mind you, this isn’t pure overclocking though, but this feature unlocks some of the restrictions and limits imposed on non-K CPUs. A higher TDP limit gives more breathing room, and also allows a non-K CPU to run at a higher base frequency. Of course, all this comes with a higher power consumption and more heat, so the CPU cooler will decide the highest base clock value.

‘Tau’ is a timing variable. It dictates how long a processor should stay in PL2 mode before hitting a PL1 mode, or before having to fall back to the base frequency. Do note that Tau is not dependent on power consumption, nor is it dependent on the temp of the processor, because if the CPU hits a thermal threshold limit, then a different set of low voltage/frequency value curves are used and PL1/PL2 is discarded.

PL1 is the expected steady state power consumption of any processor (long term). The PL1 is usually defined as the TDP of a processor. So if the TDP is 60W, then PL1 is 60W.  PL2 on the other hand is the short-term maximum power draw for a processor. This number is higher than PL1, and the processor will go into this state when a stress or workload is applied, allowing the CPU model to use its turbo modes up to the maximum PL2 defined value.

The increase in base clock speeds will vary from 800 MHz to 1,100 MHz, depending on the model/SKU of the processor. The company has not given any information as to whether BFB is an automatic algorithm that decides on the optimal frequency, or if the user would have some type of control over it.

BFB will not produce the same level of uplift performance on all Comet Lake processors though. For what it’s worth, AMD allows CPU overclocking on B450 motherboards, and it applies to all Ryzen 3000 series processors. According to ASRock, BFB can also overclock some processors like the i7-10700 by as much as 900 MHz, depending on the variables. 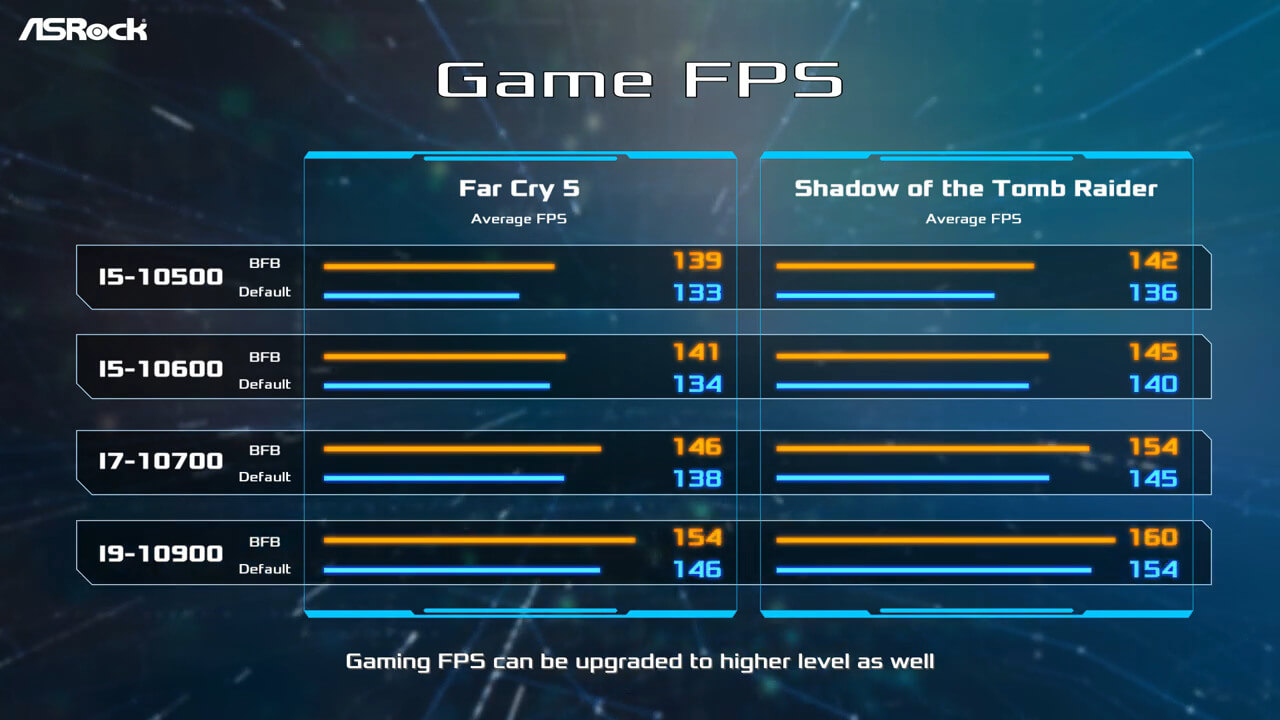