Some alleged GPU IDs of the entire next-gen Navi 2x lineup have been reportedly spotted by _rogame and @KOMACHI_ENSAKA on Twitter (via Videocardz). These entries confirm that we have at least three different GPU variants of the next-gen RDNA2 architecture.

The ID GFX10** is often found in the description of CompuBench and drivers, and if you know it, you can infer to some extent which generation the GPU is. GFX101x is the first RDNA. And GFX103x is currently assigned to the GPU that is estimated to be the 2nd generation of RDNA.

Out of these three spotted entries, only the full-fledged “Navi 21” die will likely form the BIG Navi GPU which will also likely end up in the high-end flagship gaming card (e.g. the RX 6900/XT ?). Navi 21 also known as ‘Big Navi’ has the GFX ID of 1030. We are more interested in this card.

Navi 21 is estimated to be a high-end GPU of the 2nd generation RDNA2 arch. On the other hand, “Navi 23” is presumed to be a subordinate model of Navi 21, but it is not very clear where this card will fit, but it is presumed to replace Navi 14. Which means Navi 23 is basically an entry-level product. This Navi chip is now listed in between Navi 22 and Van Gogh as GFX1032. 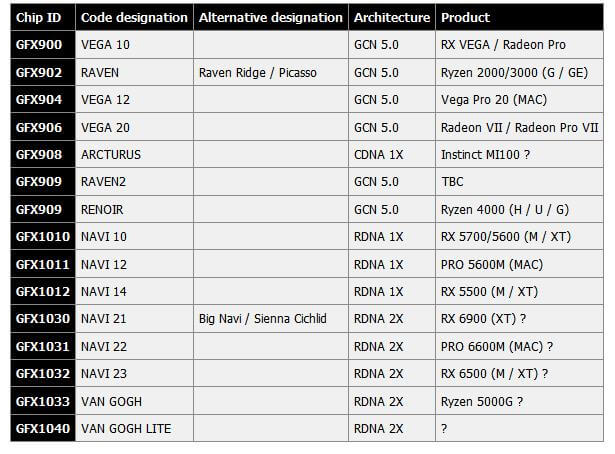 Navi 23 does not seem to have a direct predecessor, because today AMD uses Navi 10 and 14 chips on its cards. It could be a new GPU with RDNA2 (or still RDNA, who knows), but belonging to a more powerful sector than Navi 14 for sure. Some previous leaks mention that the die is about the same size as the Navi 10, so it doesn’t seem like a low-end chip to me though.

Lastly, the Navi 22 could then replace the Navi 12 for Apple computers. This chip is a custom GPU for the Apple MacBook lineup. “Navi 22” in the middle seems to be the successor to Navi 12 that appeared as Radeon Pro 5600M few days ago. In other words, it seems that it will be an Apple model again. As was the case with the Vega 12, will the last digit ‘2’ be an Apple-only model once again?

We also have a couple of Navi based APUs. These are “Van Gogh” and “Van Gogh Lite”. These most likely won’t be for the AM4 platform. It’s unclear what Van Gogh refers to (whether it’s an APU for PC or some custom chip), but it’s presumed to be something that belongs to RDNA2 as long as it’s GFX103x.