DICE’s Johan Andersson revealed today that AMD and DICE are working on a low-level high-performance graphics API for Radeon cards, called Mantle. According to AMD, Mantle offers up to 9X more draw calls per second than other APIs by reducing CPU overhead. This is crucial as according to Johan, this API will be able to finally offer PC gamers proper multi-tasking scaling on the CPU without the need to handle all the background draw calls that the original, old model, requires.

Johan described this API similar to the one found on consoles where programmers are able to code to the metal. Moreover, Mantle enables higher graphics performance with direct access to all GPU features and brings some new rendering techniques (which AMD will most probably reveal at the AMD Developer Summit in November 11-14, 2013 in San Jose).

Mantle is compatible with DirextX HLSL for simplified porting, will works with all GCN GPUs, and Battlefield 4 will be the first game supporting it.

As Johan noted, this API will be introduced to the game via an update, meaning that the game won’t ship with Mantle. This is really interesting as AMD owners will be able to witness the performance difference that this API aims to bring.

Johan did not clarify whether Mantle will support Nvidia’s cards. If this API remains exclusive to AMD, then it will be 3DFX all over again (with its GLIDE API). Not only that, but AMD will be able to ‘convince’ developers to use it as its GPUs are already powering both of the next-gen consoles. And if Mantle actually does offer 9X better performance than the older APIs, then we’re pretty sure that AMD has already won the next GPU battle. 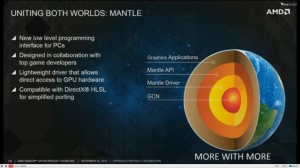 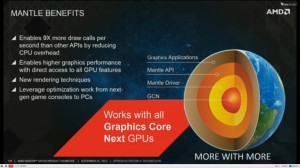