Intel seems to have been hit by a massive data-breach earlier this week. Tillie Kottmann, who is a Swiss IT consultant/engineer, posted a link on his Twitter account of a file sharing service and archive that contains the data breach, which is almost 20-gigabyte in size. A 20GB folder containing the confidential intellectual property of Intel has been compromised. Documentation including chip design and code related to key chip engineering has been leaked online.

Tillie Kottmann revealed the existence of the breached documents and says that he got it from an anonymous source, and most of the information is Intel’s protected intellectual property. The Swiss software engineer was told that the information was stolen from Intel in a breach earlier this year. “They were given to me by an Anonymous Source who breached them earlier this Year, more details about this will be published soon,” says Kottmann.

Intel is currently investigating this security breach in which 20GB of internal documents have been exposed and leaked, with some of the files even being marked as ‘confidential’ or ‘restricted secret’. The files were leaked and then uploaded on the Kim Dotcom-created MEGA file sharing website.

This is the first 20gb release in a series of large Intel leaks.

Most of the things here have NOT been published ANYWHERE before and are classified as confidential, under NDA or Intel Restricted Secret. pic.twitter.com/KE708HCIqu

Kottmann got these leaks because he operates a popular Telegram channel where he frequently publishes data that has been inadvertently leaked online through misconfigured Git repositories, cloud servers, and online web portals from major tech and IT companies. The Swiss engineer claims there are more leaks to come in future. According to the Swiss IT consultant, the password-protected zips in the folder may be accessed by using either ‘Intel123’ or ‘intel123’ as the password, which may have been set by Intel itself.

Kottman states, “If you find password safe zips in the release the password is likely either” Intel123 “or” intel123. “This was not set by me or my source, this is how it was purchased from Intel.”

The folder which is circulating wildly on the social media has been labelled as ‘Intel exconfidential Lake Platform Release’, and was originally posted on the mobile messaging platform Telegram. Intel has replied to this data breach, saying the company is currently investigating this situation. Intel responded to Tom’s Hardware with an official statement:

“We are investigating this situation. The information appears to come from the Intel Resource and Design Center, which hosts information for use by our customers, partners and other external parties who have registered for access. We believe an individual with access downloaded and shared this data.”

Surprisingly, some of the breached documents/files are marked with NDA license agreements to Centerm Information Co. Ltd., which is a Chinese company, so it might be possible that this company could have been also hacked. Though, none of the leaked files contain any sensitive or personal data about Intel customers or its employees. But the question remains to what else the alleged hacker had access to before stealing and releasing Intel’s confidential data/files?  Intel actually denies being hacked, strongly disputing Kottmann’s claim.

The anonymous leaker said more files will be shared soon, and the future parts of the leak will have even juicier and more classified stuff. The report cautioned against downloading any file from the link as it may pose a serious hacking risk. The hacker told Kottmann that he found an Intel server on a CDN which lacked proper security, and with a Python script the hacker scanned files and folders that did not require a password, or they were using default passwords. The breached software contains backdoors as well.

Below is the Summary of the leaked Intel confidential files. The files also contain technical specs, product guides, and manuals for CPUs dating back to 2016. 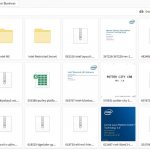 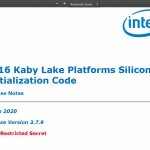 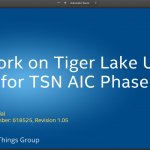