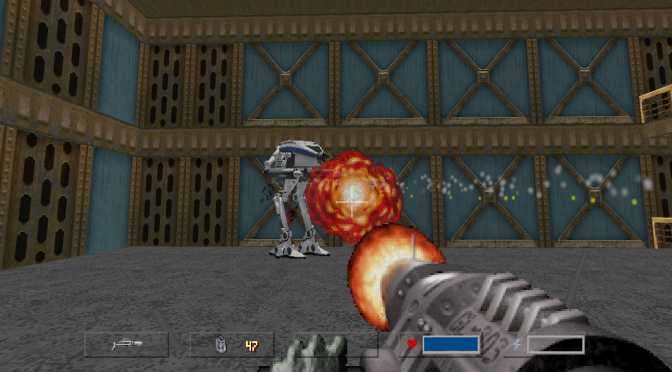 Modder ‘P.Rex’ has released the first public beta version of his unofficial sequel to the Crusader duology, CrusaDoom. As the title suggests, CrusaDoom is basically a total conversion mod for Doom 2/GZDoom.

“CrusaDoom is an unofficial sequel to the Crusader duology by Origin Systems that also crosses over Crusader’s universe with Doom’s. CrusaDoom puts you once again in the role of the crimson-clad Silencer, who upon returning from the moon to Earth discovers it ravaged by a demonic invasion. This mod seeks to adapt Crusader’s unique features and art style to Doom’s aesthetic and core gameplay.”

Its final version promises to have interactive computers, safes and other objects, as well as Health and Energy regeneration pods. It will also have destructible scenery, lasers and force fields, randomized loot boxes, as well as robots (both friendly and hostile).

Kudos to our reader ‘durka durka’ for bringing this to our attention!