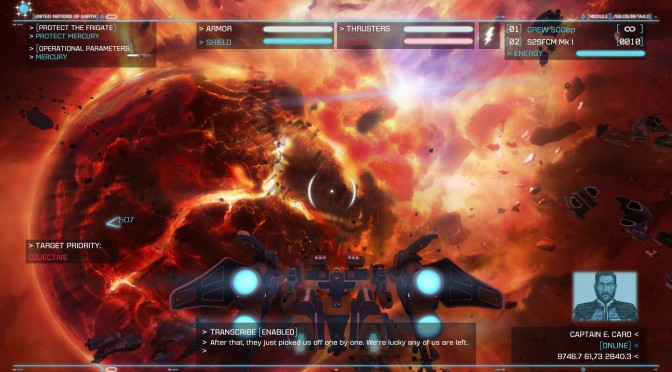 Born Ready Games was kind enough to provide us with a review code for Strike Suit Zero: Director’s Cut, and you can read below our first impressions of it. Strike Suit Zero is described as a PC game that offers fast and frantic space-combat, putting you in the middle of massive fleet battles where the fate of Earth relies on your dogfighting skills.

The game was released on the PC this January and Born Ready Games has just released a Director’s Cut version of it. This Director’s Cut version comes with a restructured campaign, all new ship models, greatly enhanced textures and lighting, two additional Strike Suits (the Marauder, and the Raptor) and the extra Heroes of the Fleet campaign.

Let’s start our article with the visuals. The game suffers from a lot of aliasing, even at 1080p with its in-game AA option enabled. PC gamers will need to use higher resolutions (and downsample the game) in order to eliminate this issue. It would be great if there was an option for SSAA or for MSAA but unfortunately, the game does not come with such features.

Strike Suit Zero: Director’s Cut looks otherwise nice, though we have to admit that we were expecting a little bit better visuals. We’ve not played the vanilla version but this new, improved, version shows somehow underwhelming visuals. They are not bad, but we’ve noticed a lot of low-res textures that have a negative impact to the game’s overall image quality.

But who cares about the visuals when a game is actually good, right? Fortunately, Strike Suit Zero is a fun game. The space combat sequences are great, despite the fact that the weaponry arsenal feels a bit limited. In an age where space combat games are quite and a few, Strike Suit Zero feels like a great offer. After all, there is not much of a competition as both Elite Dangerous and Star Citizen are nowhere to  be found.

All in all, we enjoyed Strike Suit Zero. While it’s not the next big thing in space-combat titles, it is fun and it’s something to keep you busy until Elite: Dangerous and Star Citizen are further polished. Strike Suit Zero comes with some nice touches (like the ability to transform to a robot) but the game overall lacks the ‘wow’ factor. Given the fact that this is Born Ready Games’ first game, it is a polished product. Let’s just hope that the next title – or the game’s sequel – will be more polished with more weapons, better visuals, more wow-ish scenes and better voice acting.