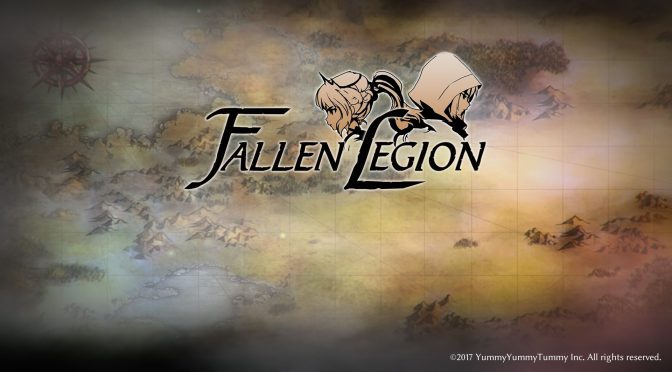 Fallen Legion+ is a new action RPG that just came out on the PC. The game was originally released for the PS4 and PSVita and the Steam version features both the Fallen Legion: Sins of an Empire and the Fallen Legion: Flames of Rebellion bundled together. Below you can find our First Impressions accompanied by a 10-minute playthrough video.

Fallen Legion+ is not your traditional action RPG as you cannot control in real-time your characters. Players can visit various regions, read the story, and embark on battles right from the get-go. Exploration is minimal and the battles rely on turn-based mechanics. As such, do not expect an action RPG similar to Path Exile or Diablo.

Fallen Legion+ lets you control up to four characters simultaneously, supports a combo system, and allows you to counter enemy attacks with a well-timed block. Moreover, you can use magic attacks in order to heal or deal more damage to your enemies, and your choices thoughtout the game will impact the its story.

My biggest gripe with Fallen Legion+ on the PC is its first minutes. The game does not feature any control options at all and the first enemies are really hard, especially if you don’t know what you should be doing. Not only that, but the tutorial is completely messed up due to a higher level of difficulty. The game does not inform you about its counter/block mechanics and your main characters WILL die in the first tutorial battles if you don’t use them. The game also does not inform you about the healing or the reviving magic abilities, so things get even worse during its first minutes. Ultimately, this means that a lot of players will get frustrated with Fallen Legion+ right from the start. A better tutorial and a proper menu for controls would do wonders to this game.

Speaking of menus, and while the game displays proper on-screen keyboard indicators, Fallen Legion+ feels like a console game that was harshly ported to the PC. There is no quit button while playing (you have to go back to the Title screen), no graphics/audio settings, and no control settings. Hell, you can’t even map your keys. Seriously, here are the game’s menus.

Thankfully, and due to its 2D nature, the game looks and runs great. It also plays well with the keyboard (that is of course if you don’t mind the default keyboard mapping), although there is a slight lag between pressing the block/counter key and witnessing the counter attack. It will take you some time in order to master the game’s counter abilities.

In conclusion, our First Impressions of Fallen Legion+ were not that great, especially due to the game’s inability to properly walk us through the controls. There is no doubt that underneath this mess there is a good game, however it’s inexcusable for a PC game in 2017 (even though it’s a console port) to not offer a controls menu. Also note that our “First Impressions” focus on the first minutes of a game. This isn’t a Review and we are reporting our first impressions with a title.

Below you can find a video showcasing the first 10 minutes of the game during our first playthrough. As you will see, our characters could have been easily killed right from the start, way before the game presented its blocking/countering/magic mechanisms!