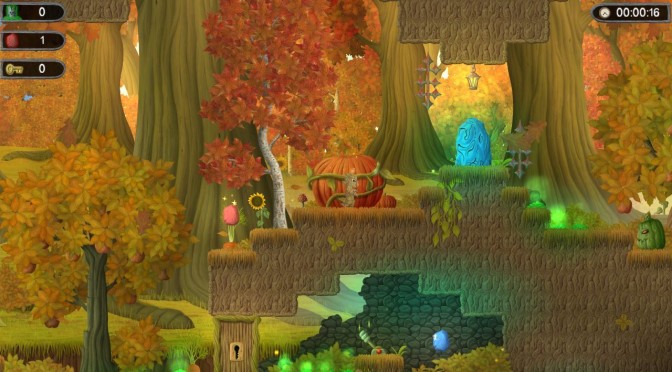 Enitvare was kind enough to provide us with a review code for Stonerid – a new 2D platformer – and you can view below our first 15 minutes playthrough. Stonerid is described as a difficult 2D platformer, and its most important feature is two parallel, differently designed worlds.

Stonerid comes with 5 diverse lands, high difficulty level and 32 different levels. In order to complete them, players must deftly use differences between alternative dimensions.

Stonerid is kind of unique and is definitely interesting. This is basically a trial & error title in which you have to figure out – by constantly losing – what your next move will actually be. Contrary to some other platformers, though, Stonerid does not get annoying or frustrating.

Story, graphics and control mechanics in Stonerid are pretty basic. Players can jump, climb ladders, alter dimensions and activate switches. The key feature of Stonerid is the ability to switch between dimensions in order to further progress. However, this is also the one feature that might disorient a number of gamers.

We also suggest using a gamepad. As with most platform games, it’s a bit pain in the a*s while using a keyboard. It’s definitely playable with a keyboard, however you will be able to control your characters with more precision while using the sticks of a gamepad.

Stonerid can be purchased from its official website, and there is also a demo for you try.