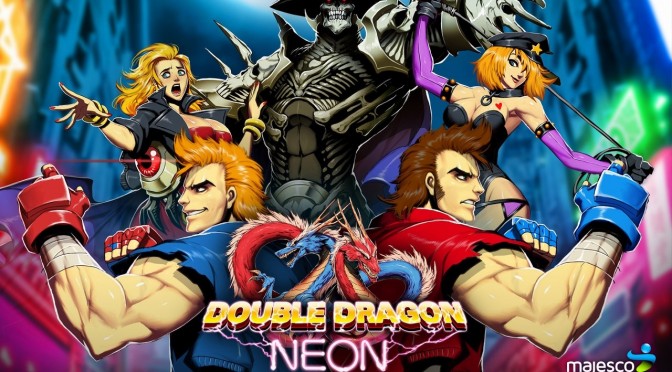 Double Dragon: Neon has just been released on the PC, and below you can find our first 10 minutes playthrough. Double Dragon: Neon comes with an updated look and sports similar gameplay to its arcade ancestor. And while this remake looks great, there is certainly something that will put you off.

The biggest gripe I had with Double Dragon: Neon was its newly introduced upgrade system. This skill tree – and the way players can earn points to upgrade their characters – results in grinding, and that’s something that will disappoint a lot of arcade fans.

To its credit, Double Dragon: Neon looks and sounds great. The new 3D graphics are great and the animation system is packed with lots of frames, resulting in smooth transitions while executing different moves. Unfortunately, though, controls are a bit of a letdown (at least at first glance).

Billy and Jimmy Lee feel really ‘heavy’ and ‘slow’. Not only that, but there is a slight delay when you press the jump button, and the animation that was introduced before running is an awful addition. Moreover, there is a separate button for running, something that may confuse platform fans. After all, most of us are used to double-buttoning a direction when we want to run.

However, most of these are basically small nitpicks and nothing more. Once you get used to the game’s control mechanics, Double Dragon: Neon becomes fun. But man, that upgrade skill tree system was a terrible, terrible idea.

Going a little bit off-topic now. The closed beta phase of The Elder Scrolls Online has been launched. Although we’ve managed to get a taste of it, we’re unable to share any videos or our initial impressions about its performance as Zenimax has not given us yet the green light. We’ve contacted the publisher about it and if Zenimax does not reply on our request… well… we won’t bother with this title at all. Yes, yes. It sucks. But that’s how things are for independent websites. Still, we have some more indie games for you, so stay tuned for more.