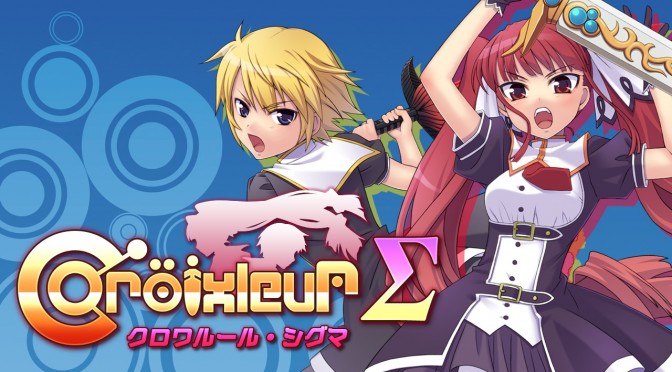 Nyu Media was kind enough to provide us with an early review code for Croixleur Sigma, and you can read below our first impressions of it. Croixleur Sigma is an expanded version of the original Croixleur featuring a new playable character, two player co-op, new gameplay modes, improved graphics, new music and more.

According to the company, here are the game’s key features:

Croixleur Sigma comes with some gorgeous stylished anime visuals, and since we are fans of both of anime and mange, we kind of enjoyed them. The game packs Japanese dialogues, giving it an even better ‘feeling’that will be appreciated by all anime fans.

The gameplay Croixleur Sigma is quite good, although the combo system is limited. There is only one combo, though players can combine different attacks. The game’s character is really responsive and every feels polished to a degree.

And while the game looks good and plays well, its biggest disadvantage is its length and its level design. Unfortunately, the game is filled with limited arenas that get repetitive quickly. Not only that, but the game’s Story Mode can be finished in just an hour. That’s a major issue in our opinion, despite the game’s low price.

Alongside the Story Mode, the game offers Score Attack, Survival and Challenge modes. But let’s be honest; those modes are not the focus of the game and while they are a nice addition, they are incapable of extending the game’s length.

All in all, Croixleur Sigma feels great but does not last long enough. Croixleur Sigma is among the shortest games we’ve ever played. The good news is that it will be priced at only $7.99. But man, the game would be way, way, way better if it featured a proper storyline, better environments, featured a deeper combo system and lasted longer.

Croixleur Sigma had a lot of potential. Its core mechanics and aesthetics are awesome. However, it feels more like a demo than a full fledged product.