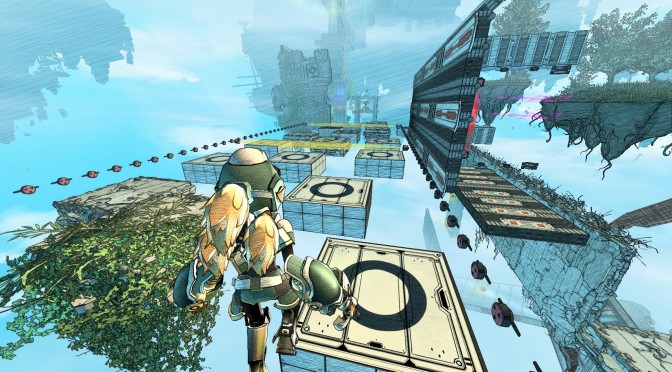 Rising Star Games has provided us with a review code for its free-running platformer, Cloudbuilt, and you can read below our first impressions of it. Cloudbuilt is described as a game of speed, precision and freedom, in which players use their rocket-powered exoskeleton and manipulate the laws of physics to avoid fatal hazards, dodge hostile robots and reach not just the finish line.

What initially caught my attention was the game’s amazing art style. Let’s be honest here; Cloudbuilt is a piece of art. The game packs incredible cel-shaded visuals that suit it style, and make it stand out. Rising Star Games has created a beautiful game, despite the fact that it does not push the graphical boundaries of the PC platform.

Cloudbuilt is a great free-running platformer, though its controls will make you struggle at first. There is a learning curve and until you get used to your character’s movements, you’ll be falling off cliffs and platforms. So make sure to be patient with this game until you master its controls, otherwise you’ll get frustrated and will start shouting like little kids.

Cloudbuilt tells the story of a young woman facing a mysterious world. There are twenty levels and the story progresses as you finish each level. Do note that there are four endings, so you’ll have to replay it more than once in order to get the full experience. Unless of course you are satisfied with a single ending that is the result of your initial decisions.

Cloudbuilt was quite enjoyable. As said, it took me a while to get used to its controls but apart from that, I did not experience anything that could make me turn it off. It looks beautiful, it plays fine, it requires reflexes, it’s fast-paced, and it does not require a high-end PC to run. Oh, and there is also a FOV slider.

Cloudbuilt is available on Steam and priced at 18,99€.