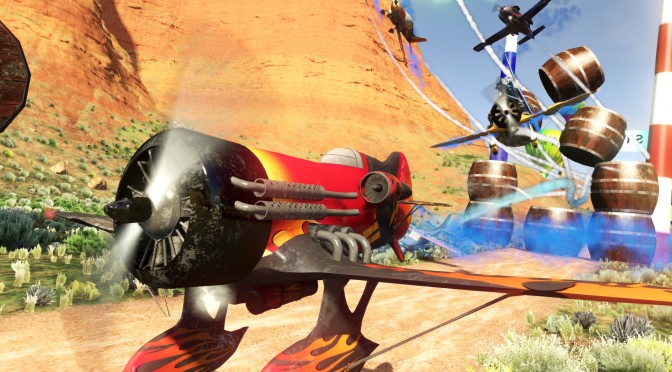 Altitude0: Lower & Faster is basically a new take on arcade racing, and is described by its developers (do note that Gugila is a two-man team) as ‘Burnout racing’ in the Sky.

Altitude0 Lower & Faster seems – on paper – a fun game but as you can see in our video, we encounter major issues with its online portion. For some unknown reason, we were unable to connect to the game’s servers no matter what (this issue has not been fixed yet as… well… we are still unable to connect to its servers, despite the fact that we’ve white-listed the game in our Firewall).

Moreover, we found controls to be a bit awkward (especially for an arcade flight game) and on occasions unresponsive. We strongly believe that Gugila will have to work on them in order to give a more arcade-ish feel to how you can control your plane (after all, this is an arcade game).

Graphics wise, Altitude0 Lower & Faster looks great for an indie title. While this isn’t the most technically advanced flight game, it comes with destructible planes and beautiful environments full of colors. Yes yes, there is noticeable pop-in of objects and there aren’t any advanced lighting techniques but still; it gets the job done nicely.

Altitude0 Lower & Faster is currently available via Steam Early Access and Gugila will be adding more content to it. While the game has a lot of potential, we kind of feel that it still needs a lot of work. I mean, it took us more time to start a stage than to complete it. And that says a lot. Speaking of which, the first stages are really, really, really short. We are talking about races that only last 20 seconds. Yes, those were the beginner stages but they feel too damn short even for that difficulty level.