And it’s that time of year again. 2015 is over and a new year is in front of us; a new and exciting year with lots of challenges to overcome. And while we’ve faced some difficulties these past months, we can guarantee you one thing; we are not going anywhere. In the following paragraphs we’ll talk about the things that happened these past twelve months, as well as our future plans. So without further ado, here we go.

In 2015, DSOGaming had 6,165 million visitors. For comparison purposes, in 2014 we had 5,740 million visitors. This means that DSOGaming’s fan base is still growing. This is basically all thanks to you, our readers, who have embraced us. Without you, we wouldn’t be here. So, from the entire DSOGaming team, thank you.

As you may have noticed these past two months, we’ve removed our Interstitial ad. While this ad was really helpful in our first three years, we’ve decided to remove it in order to make our website friendlier and more accessible to everyone. Because, let’s face it; this particular ad made a lot of people dislike DSOGaming. However, it was a necessary evil. Thankfully, we are now in a position to keep our website alive without it, therefore we decided to completely remove it instead of capitalizing on it.

Our most successful (in terms of pageviews) story in 2015 was the recreation of Super Mario 64 in the Unity Engine, followed by Paradox’s anti-piracy article, the first texture pack for Fallout 4 and our comparison between The Witcher 3’s E3 and 2015 builds. From the get-go, DSOGaming has been really supporting indie developers and modders. We want to put these guys in the spotlight, and we will continue doing so in 2016. 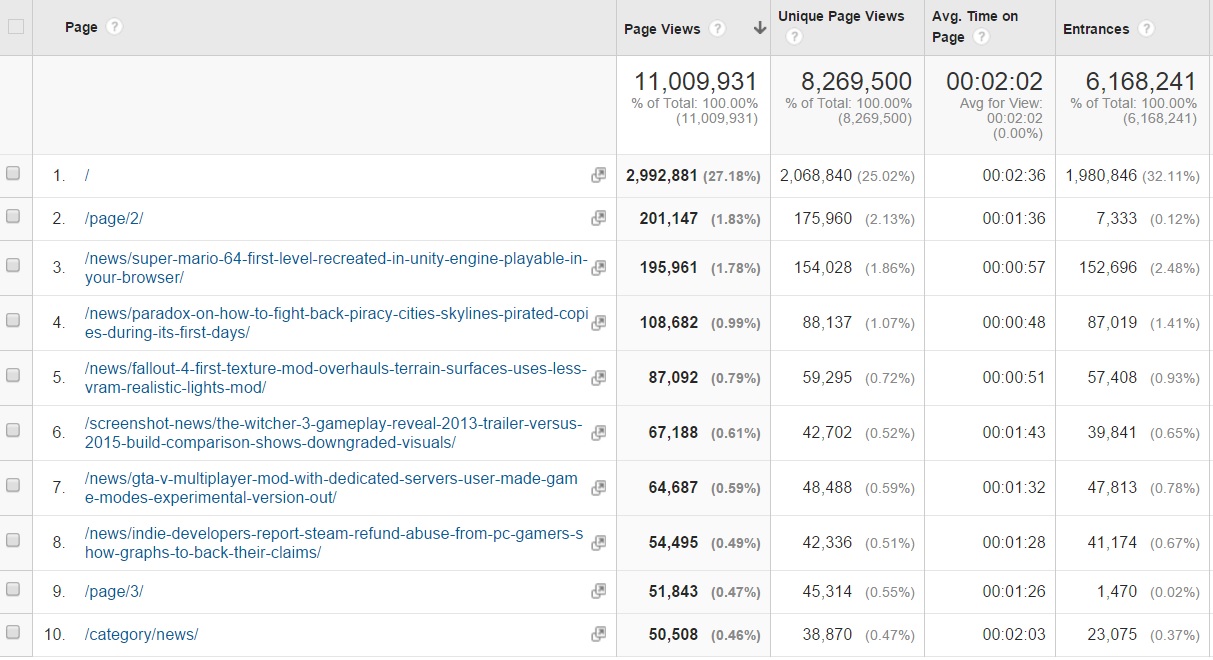 Back in August, we launched a Patreon crowd-funding campaign in order to remove all of our ads. While this Patreon campaign did not take off, we are really greatful to those who have supported us. We originally planned on removing our Interstitial ad once we hit our $400 goal. Well, as you can see, we’re very far from it. Still, we decided to think outside the box and remove it regardless of that. Because our readers deserved a reward, no matter what.

As we’ve said a million times, DSOGaming is a truly independent gaming website. Thanks to clever decisions, we’ve been able to maintain DSOGaming the way it is. This means that: a) we can write about anything we want, b) we can criticize each and every company, c) we’ll remain focused on PC gaming, and d) we’ll keep those Performance Analysis articles coming, no matter how many publishers blacklist us.

At this point, we’d like to mention two companies that really impressed us with their openness and friendliness, despite us criticizing their games. These companies did not blacklist us, even after some really harsh – but totally justifiable – articles. And these two companies are: CD Projekt RED and Ubisoft.

As you’ve already seen, one of our top stories in 2015 was the comparison between The Witcher 3’s different builds. We’ve covered this subject extensively and presented evidence that The Witcher 3 was downgraded, despite CD Projekt RED’s initial claims. And contrary to those articles that went viral, CD Projekt RED treated as like no other company. Not only was CD Projekt RED open to new interviews, it did also send us a Review code, replied to each and every of our emails, and was more than happy to provide us with a key for our Christmas giveaway.

The same can be said about Ubisoft. You all know how Ubisoft has been treated here. From Assassin’s Creed: Unity’s micro-stuttering issues to Watch_Dogs’ downgraded visuals, we’ve been among the first to criticize Ubisoft’s titles. Again, we may be harsh but let us say this; each and every article is backed up with evidence. We’re being honest with you, our readers, and this may seem unfair to big publishers. However, and despite all those harsh articles, Ubisoft has not blacklisted us. Not only that, but it was – alongside CDPR – among the first to provide us with a key for our Christmas giveaway. And yes, there are some Ubisoft games that were able to avoid our hammer of justice due to actually performing/running great on the PC platform.

Naturally, this will not change our attitude towards the new and upcoming games from these studios. After all, we can’t wait to see whether or not The Division has been downgraded. However, we do have to acknowledge these two companies for behaving the way they did in 2015 .

While 2015 was a great year for us, we did fail you in one particular area as there is still no AMD GPU on our PC Performance Analyses. That’s something that will change in 2016. Moreover, we’ll replace our SLI GPU with a Single-GPU solution. That’s because in 2015 we got three triple-A titles with major SLI/Crossfire issues. These titles were no other than Batman: Arkham Knight, Assassin’s Creed: Syndicate and Just Cause 3. Believe it or not, SLI support (at least for triple-A games) has gotten worse, which is why we do not recommend spending your money on such configurations.

Thankfully, we were able to fulfil some of our promises. Our Interstitial ad has been removed, two new Editors (Matt and Spencer) have joined the team, we’ve covered most triple-A games (apart from AC: Syndicate and Just Cause 3 that still face major multi-GPU issues) and we’ve been doing our best to support indie developers, game artists and modders. We’ve also addressed some connectivity issues a number of our readers faced, and offered our readers the freedom to discuss anything they wanted (from criticism to DSOG to console-oriented topics). And not a single comment was deleted.

And that is that everyone. We hope that 2016 will be an even greater year for both DSOGaming and PC gaming. DSOG is not going anywhere as we are currently stronger than ever. Here’s to a wonderful 2016!