Man, this simply can’t be a simple coincidence. It’s pretty much clear that most of us want to see Half-Life 3 and it’s true that Valve has been hinting for it, but is that all we got? Apparently not as all hell has broken loose these past days. Forget the HL3 T-Shirt and the fact that Gabe Newell – that’s according to an insider so take it with a grain of salt – has given the green light to Valve’s employees to start hinting about the next Half-Life title. Yeah, those are quite good enough in order to assume that we’ll have some news about HL3 in 2012 but Valve themselves has given us lots of little hints and easter eggs these past days. 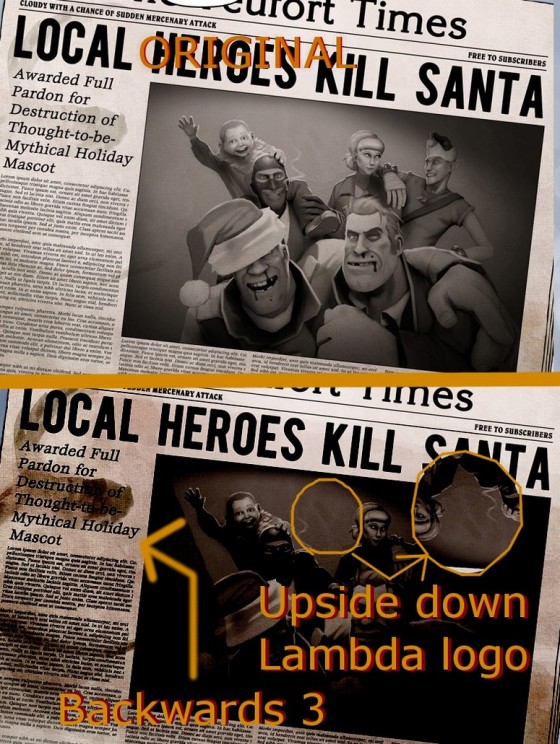 Now the following could be mere speculation, so take them with a grain of salt. However, all of these images and hints can’t be concidence. Let’s start first with the TF2 that was revealed at page 14 of the recently released “A Smissmas Story” comic. At first glance, the above image seems fine and simple, right? Well, take a closer look at the engineer and notice that white noise effect next to him. Well, apparently this is not a compression error as we can clearly see an upside-down Half-Life symbol. Not only that, but this weird stain on the left is a backward 3. This simply can’t be a coincidence, right? Special thanks go to General Cornwaffle on DeviantART for analysing this image.

Here is and another big hint towards Half-Life 3. At the end of the fifth day of Valve’s Holiday Sale slideshow, there is an out-of-place picture that shows Santa Claus. Fair enough, it’s Christmas so let’s say that Valve wanted to wish everyone a Merry Xmas. But tell us this; how come Bodkins, one of Valve’s mascots, is wearing a Half-Life necklace? How come there is no reference in ANY other Valve game in this image? How come there are three lights in this necklace? Three, as implying that Half-Life 3 will be brought to you by Santa. Not only that, but Santa’s S letter has five lights that are arranged exactly in the shape of a Lambda. I mean, seriously now, couldn’t Valve arrange them in a different way or use more/less lights or use any other game? This is really suspicious. 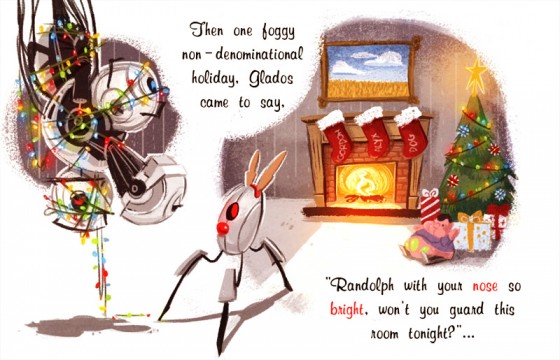 And then there is the a comic called “Randolph, the Red Nosed Turret” that was offered via the Valve Store. In page 3, we can see that the ‘Randolph’ turret is tasked to defend the Christmas tree. But take a closer look and notice that there are three stocking, three clouds in the painting – a painting that is similar with the end scene of Portal 2 – and three gifts under the Christmas tree. And all of them are in page 3. Well, that’s too much of a coincidence guys.

Could we be that desperate to see Half-Life 3 and as a result of that we’re seeing non-existent hints in these images? Perhaps. However let’s not forget that Game Informer did say we’d see a Half-Life 3 reveal this year, the appearance of the Half-Life 3 logo in a mysterious website, a US-based Valve voice actor told Official Xbox Magazine that he had done voice work for the upcoming Half-Life and Wheatley, implied that a new Valve singleplayer title will be out in 2012.

These are too much to simply pass by. Or let’s put it this way; Half-Life 3 hasn’t received major hints in these past years – well, apart from some rumors here and there but not THAT much – and suddenly we’ve been bombarded with so many indications. Our guess? 2012 will be Half Life 3’s year as Valve is certainly hinting to it. Could we be wrong? That’s affirmative. After all, Duke Nukem Forever was supposed to be released a decade ago and Half-Life Episodes were originally meant to be released on a monthly basis. And look how differently things turned out to be. Let’s just hope that Valve will not disappoint us this time around!