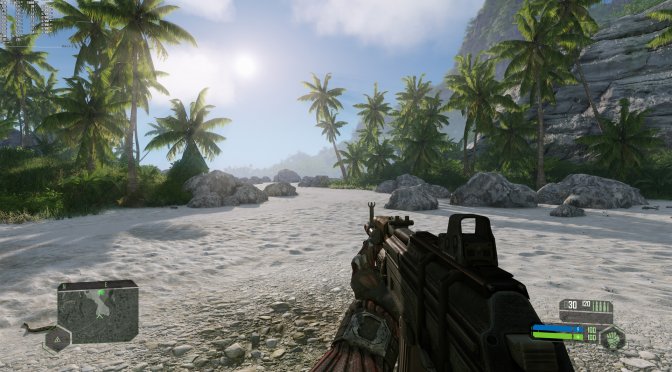 As we’ve already reported, Crysis Remastered suffers from some awful CPU optimization issues on the PC. The game uses DX11 and VKray extension on top of it (in order to support hardware-accelerated Ray Tracing), and uses the Denuvo anti-tamper tech. However, we can all agree that the game can look absolutely gorgeous in 4K when maxed out.

In order to capture the following screenshots, we used an Intel i9 9900K with 16GB of DDR4 at 3600Mhz. Naturally, we’ve paired this machine with an NVIDIA RTX 2080Ti. We also used Windows 10 64-bit and the latest version of the GeForce drivers. We’ve also included MSI Afterburner in our screenshots in order to give you an idea of the in-game performance. Do note that this is an early performance report, and not our full PC Performance Analysis. This will come later this weekend and will cover both NVIDIA’s and AMD’s hardware.

Crysis Remastered is a great looking game, there is no doubt about that. On Max Settings, there are minimal pop-ins, something that can please a lot of PC gamers. The new high-resolution textures look gorgeous, though we did notice some awful low-res textures on some leaves. The new lighting system, however, is a mixed bag; while it can look amazing at times, it is also a bit underwhelming at other times. Take for instance our thirteenth screenshot. The game looks really bland and flat with this particular TOD setting. Still, and when everything works as intended, Crysis Remastered can look as good as most modern-day first-person shooters. There is also no question here; Crysis Remastered looks way better than its original 2007 version.

However, the increased LOD level comes with a major CPU performance hit. Unfortunately, and since the game cannot take full advantage of multi-core CPUs, the increased LOD levels are not really usable on today’s hardware. Not only that, but this setting will not run well even on future CPUs. As we all know, future CPUs will focus on increasing their core numbers, and not on their frequency. As such, and similarly to the original game, Crysis Remastered will be limited by its single-thread performance on all CPUs. To make things worse, the DX11 API brings an additional CPU/memory overhead, something that could have been easily avoided with a lower-level API like Vulkan or DX12.

We’ll talk more about Crysis Remastered’s tech and problems in our upcoming PC Performance Analysis. Suffice to say that the biggest issues of Crysis Remastered ARE NOT its graphics. Until then, enjoy the following screenshots!