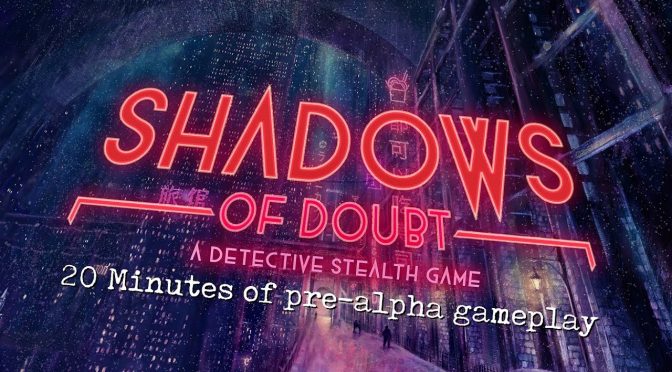 Cole Jefferies is currently working on an indie stealth detective game, called Shadows of Doubt. This game is in pre-alpha stage and Cole has just released a video, showing 20 minutes of gameplay footage from it.

Shadows of Doubt is a first-person detective stealth game set in a fully-simulated neo-noir city. In this game, there’s a serial killer on the loose, and it’s up to you to catch him by any means necessary. Players can sneak, tail, hide, hack and lock-pick in order to achieve their goals.

Players can also break into apartments, rifle through secret documents and hack security systems. The entire world will be fully simulated and each citizen will have an apartment, a job, a daily routine, favourite things to do, places to go, and people to interact with.

Shadows of Doubt has graphics that will remind you of both Minecraft and Cube World. My guess is that it’s easier to create a world looking a bit blocky with the emphasis on its atmosphere. Still, it looks really cute and that’s perhaps what really counts at the end of the day.

Below you can find the game’s key features.