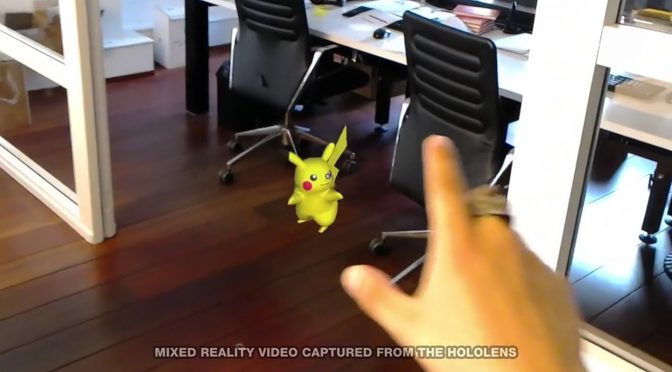 Pokemon GO is a mobile game/project that has been a great success, as pretty much everyone is currently playing it. But what would a Pokemon GO VR PC game, with full support to Microsoft’s Hololens, could look like? Well, time to find out.

CapitolaVR has developed a prototype demo of Pokemon GO running on the Microsoft HoloLens headset, with full AR-to-real-world integration.

As said, this is a prototype that may never see the light of day. Still, CapitolaVR released a video so that everyone can get an idea of what this demo is all about.

“The build was created in Unity with the HoloLens SDK.” David Robustelli, Head of Digital at CapitolaVR told UploadVR and continued:

“For now the Pokemon are randomly generated within a mapped environment. We are now focusing on how to use different gestures for specific interactions. For example, like opening your inventory or activating your map and zooming in and tilting your map. The thing is there is a huge amount of possibilities that are unexplored and which could work for games like these. A more challenging thing is how to access the Google Maps API and enabling it within a running app. But I’m sure that in the upcoming years when more and more people are developing for this hardware also more things will be standard to use in tools and apps.”

CapitolaVR does not currently have any plans at all to turn this prototype into an actual iteration of the Pokemon GO game.