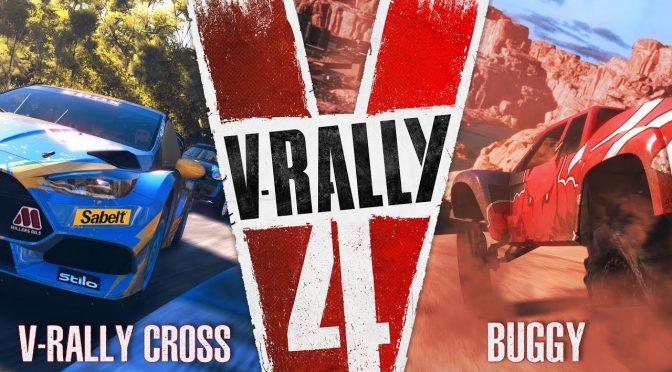 Bigben has released a new trailer for V-Rally 4 that introduces its V-Rally Cross and Buggy modes. V-Rally Cross races are intense battles with 7 other racers on tracks with a mix of dirt and asphalt, whereas Buggy aims to offer a different driving experience on particularly hazardous and spectacular courses.

V-Rally 4 aims to remain faithful to the identity of the franchise, which earned the support of millions of fans, and to strike a perfect balance between sensation, presentation, and simulation, while offering the best graphics and gameplay the latest technology can support.

Alongside the V-Rally Cross and Buggy modes, V-Rally 4 will support Rally (in which players will travel the world across difficult tracks in extreme conditions), Extreme-Khana (players will have to be precise and master drifting to be the best on these obstacle courses) and Hillclimb (players will race to the top behind the wheel of powerful cars).

The game will release this September and will also come with a Career mode and online game modes whose details will be announced soon, as well as split-screen multiplayer.