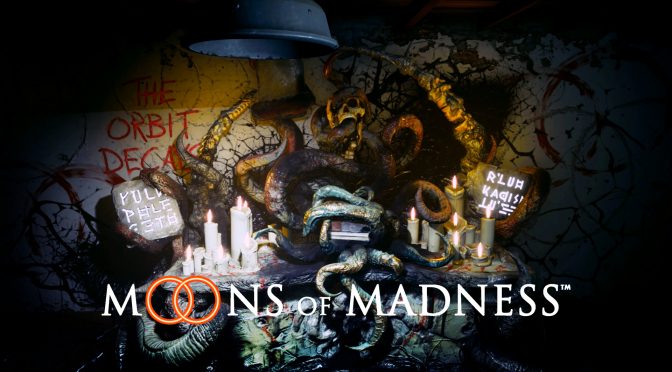 Madness, madness and stupidity, as Tywin Lannister would say. Madness most certainly as the title says. Now regarding stupidity, I hope not as we already had enough of it lately. Moons of Madness is a first-person, story-driven cosmic horror game. The game draws inspiration from H.P. Lovecraft. It was scheduled for a 2018 release but got delayed, and its final release date is now set for October 27th.

A MYSTERIOUS SIGNAL HAS BEEN RECORDED COMING FROM THE RED PLANET.

The message confounded Orochi scientists. Their analysts broke it down and determined it was of intelligent origin. Orochi management immediately concluded that the discovery was too sensitive for public knowledge and moved to keep it hidden. In secret, the corporation began construction of Invictus, a state-of-the-art Mars research outpost designed to identify the true nature of the message.

Lately we had two major games inspired by H.P. Lovecraft’s work, but unfortunately both Call of Cthulhu & The Sinking City are far from great, at least in my opinion. Hopefully this game will be more Dark Corners of The Earth and less Call of Cthulhu.

You are Shane Newehart, a technician stationed at the Invictus and your security clearance means you are completely unaware of the existence of the mysterious signal. Your job is simply to keep the lights on until the transport ship Cyrano arrives bringing with it a new team to take over your duties.

As I have stated before, I really like H.P. Lovecraft’s work and only one game ever; gave me my money’s worth.  This is the first time the studio (Rock Pocket Games) is doing something like this. Their previous two games are completely different.

Soon you discover strange and unusual setbacks. The security system is on lockdown, the greenhouse is flooded, and there is Martian dust leaking into the infirmary. Things are starting to fall apart.

Overall the game looks okay and the story might be interesting. Unfortunately I don’t think I can play it since it looks like it follows the Amnesia, Soma and Outlast rules; you are unable to defend yourself in any way. I really dislike the hide & seek mechanic in these games. The only “hide and seek” game I found interesting was Alien: Isolation, where you had a pistol, even if you couldn’t kill the super smart Xenomorph. At least you could shoot some Synthetics in the face (screw you David it’s all your fault).

You begin seeing and hearing things that aren’t there. Visions, hallucinations – or is that even what it is? Is this real… or are you slowly descending into madness?

Moons of Madness - 12 Minutes of Gameplay