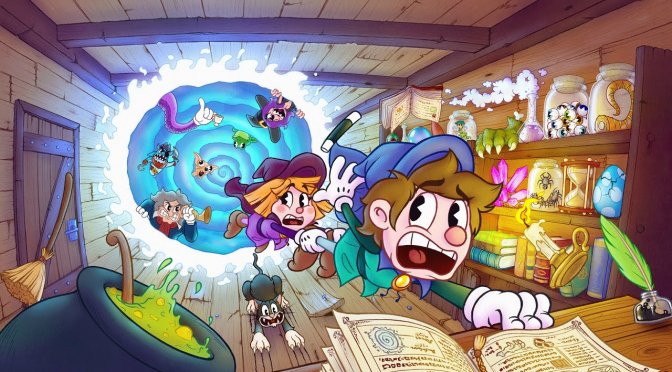 Xixo Games Studio is a two-team Spanish studio that is currently working on Enchanted Portals. Just like Cuphead, Enchanted Portals is a 2D, side scrolling, run and gun game with old-school cartoonish graphics. It does look like a reskinned Cuphead and since the release of the trailer there has been a huge backlash.

Even so, I have to admit the game looks pretty good. Usually re-skins do not look great compared to the original, however, this one looks very well done. While I understand the frustration, I wouldn’t mind if  someone re-skinned one of my favorite games, as long it is good.

From my perspective the game will probably help the specific genre grow even more. I mean if this game ends up being great, then people who did not know Cuphead, will probably check it out. Of course this is only my opinion since I have no idea how these things actually work.

Enchanted Portals is about a pair of rookie magicians who are trapped between dimensions and need to fight against funny bosses to recover the pages of the magic book so they can safely return home.

Here's the trailer for our upcoming kickstarter campaign!#gamedev #indiegame pic.twitter.com/lWAJeULb3K

The Kickstarter campaign will launch on October 24th.